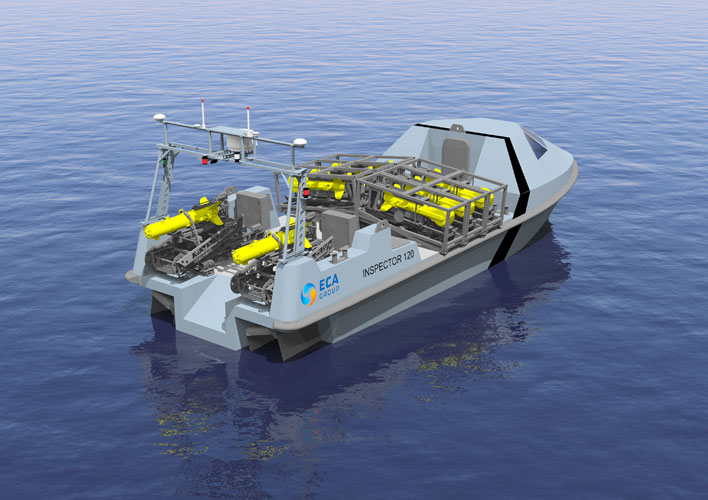 ECA Group has released a new USV INSPECTOR 120 as a part of its range of robotic and autonomous systems for naval applications including mine counter-measures.

This USV [Unmanned Surface Vessel] is 9 metres long and is able to carry Mine Identification and Destruction Systems (MIDS) and to automatically deploy these underwater robots for identification (SEASCAN) and neutralisation (K-STER C) of sea mines. The INSPECTOR 90 can also carry two sonars, one on its front arm for very shallow operations and a TOWSCA towed sonar for underwater mine detection.

The USV INSPECTOR 90 is therefore a USV that can perform all underwater mine clearance missions from mine detection to its destruction. This USV can also be used as a radio relay between other drones (AUV, UAV) and the mothership for the transmission of remote commands and sonar or video data. It was successfully demonstrated in Belgium in September 2017 as part of a Belgian-Dutch acquisition programme for 12 mine hunters equipped with unmanned systems for which a call for tender is currently open.

The new generation of minehunters (70 to 90m) carries larger underwater drones for greater endurance and better performances. Today, with the evolution of operational constraints and increasing recommendations regarding safety of crew, customers want more and more to deploy their underwater robots from an USV. To address this need, ECA Group, helped by its subsidiary BE MAURIC specialised for 50 years in naval architecture, has designed the INSPECTOR 120 a new 12 m long USV.

The INSPECTOR 120 includes all the features that made the INSPECTOR 90 a success with a greater endurance, a higher payload capacity and superior nautical performances. It has been designed to automatically deploy the most performant ECA Group unmanned systems (UUVs) such as AUV (Autonomous Underwater Vehicle) A18-M, towed sonars T18-M, MIDS, etc.

The hull of the INSPECTOR 120 is a best compromise for sea keeping, both in transit and at very low speed for launching and recovery of UUVs. Thanks to dedicated Launch And Recovery Systems (LARS) also proposed by ECA Group, INSPECTOR 120 can be deployed from any vessel of length about 50m and beyond.

The design of this USV is a result of a study on a comprehensive range of ship platforms capable to carry different configurations of ECA Group’s UMIS systems for MCM missions. Thus, BE MAURIC recently introduced the design of its new family of drone-carrying vessels, each of these naval platforms being suitable for carrying a typical UMIS system configuration.

The launching and recovery of USVs by Sea [state] 4 or 5 is an important criterion for the MCM vessel’s capacity evaluation. The USVs of the INSPECTOR range are therefore particularly studied for the best possible integration on minehunter and BE MAURIC is working on the optimisation of this integration as well as on automated recovery of USVs.

The results of this work will be presented during EURONAVAL exhibition from 23rd -26th October.