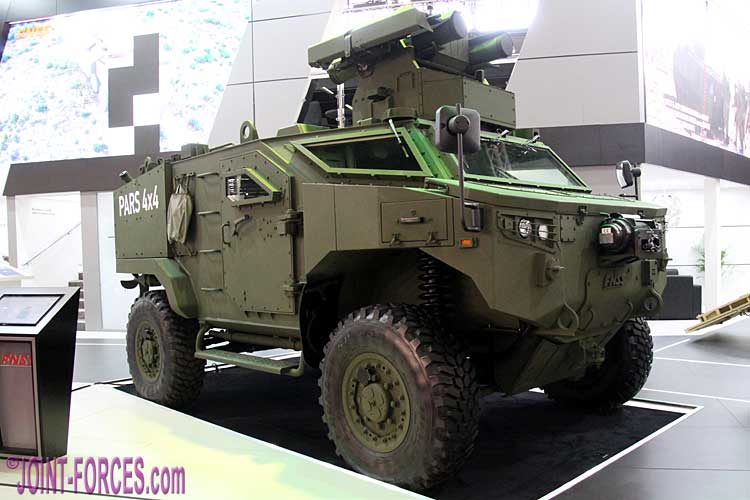 The PARS 4×4 ATV has been devised as a vehicle that offers both speed and high manoeuvrability under all terrain conditions, with sufficient firepower to destroy enemy tanks and other armoured units from a distance, and with the ability to engage second targets following a rapid change of position. Drawing upon its vast experience and innovative approach, FNSS has come up with a very special amphibious vehicle that is capable of meeting these challenging requirements simultaneously.

Most noteworthy among the PARS 4×4 ATV’s features is the positioning of its power pack at the rear of the vehicle. With the placement of cooling grate and exhaust on the upper body, this positioning allows the vehicle to go amphibious without prior preparation, thus granting it the best amphibious capabilities in its class and further allows the PARS 4×4 to manoeuvre at higher speeds. All these features, which can only be expected from a vehicle with a rear-positioned power pack, grants the PARS 4×4 with critical capabilities in moving away rapidly after launching an attack.

The outstanding capabilities of the PARS 4×4 ATV can be listed as follows:-

K. Nail Kurt, General Manager and CEO of FNSS, said that the PARS 4×4 marks the beginning of a new era in anti-tank vehicles: “FNSS closely follows both developments and user requirements around the world, and as a result of these efforts, we came up with the PARS 4×4 concept that we presented for the first time at IDEF 2017. Following the signing of our contract with the user, we readied this concept, along with its turret, for qualification tests, completely from scratch. This has allowed us to roll out a vehicle that is peerless in the world. The PARS 4×4 stands as yet further evidence of FNSS’ engineering strength and tailored capabilities. With the introduction of the PARS 4×4 into the inventory, we are certain that it will become a force multiplier that changes all the equations, first for Turkish Land Forces Command, and later, for friendly and allied nations.”

Featured, FNSS, PARS, PARS 4x4
You may also like