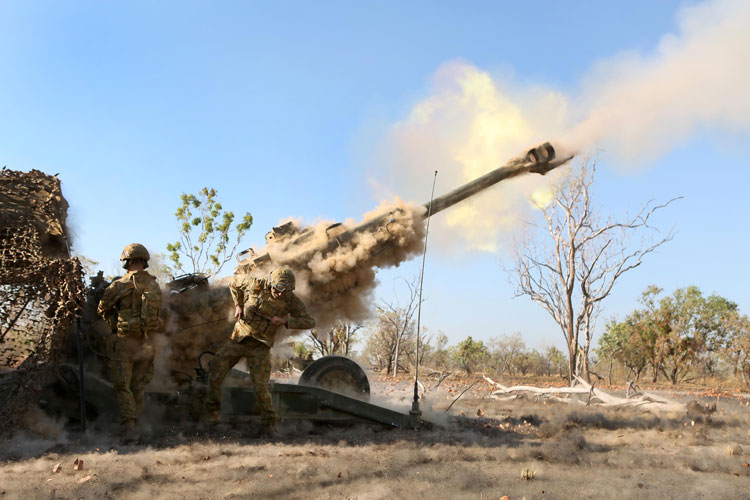 The Australian Defence Force will soon be taking delivery of various projectile types from the Rheinmetall Assegai family as well as fuses and propelling charges, supplied by a team consisting of NIOA, Rheinmetall Waffe Munition, Rheinmetall Denel Munition, Nitrochemie and Junghans Defence. The first qualification lots will already be shipped this year. A second partial delivery will take place in 2019. Following successful qualification, Australia will also procure war reserve stocks of the new ammunition.

Encompassing supply of the qualification lot and war reserve stocks, the order – awarded at the end of last year – is worth around AU$ 100 million, roughly €65 million. The contract also includes several options for further five-year periods, with a total value in the triple-digit million AU$ range.

The order represents a significant success for Rheinmetall in several respects. It will enable the Group to establish itself in coming years as Australia’s sole supplier of artillery ammunition. In addition, it is the first time a M777A2 field howitzer user nation has opted for the Assegai family. The armed forces of Canada and the United States, among other nations, also deploy the M777A2.

The ammunition will be supplied via Rheinmetall’s partner NIOA. Headquartered in Brisbane, NIOA is the largest supplier of ammunition and weapons systems to Australia’s military and law enforcement agencies. NIOA has also been cooperating closely with Rheinmetall for decades on other projects. The company joined the Rheinmetall Land400 team in May 2017.

Just last week, following a rigorous selection process, the Australian government announced its intention to buy Rheinmetall’s Boxer multipurpose wheeled armoured vehicle under Australia’s Land400 Phase 2 programme. Presuming the procurement contract is awarded as planned, the order will mean over €2 billion in sales for the Düsseldorf, Germany-based tech group. A total of 211 Combat Reconnaissance Vehicles are to be built for the Australian Forces.