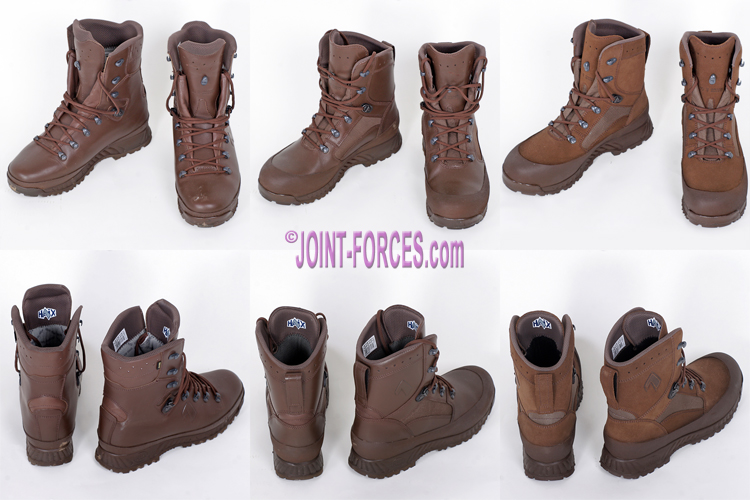 Archive: The [2012] contract to re-equip Britain’s armed forces with combat boots covers five different categories and two separate manufacturers using their own last designs will supply each category to ensure a higher percentage of troops are able to wear off-the-shelf footwear than if only one manufacturer’s products had been selected. In theory every soldier should be able to choose the one of two boot designs that better suits his or her feet (both male and female sizes cobbled on different lasts are also being catered for) thereby reducing the percentage of troops requiring specialist non-standard combat footwear and subsequently saving money.

German manufacturers HAIX, based in the Bavarian town of Mainburg with combat boot manufacturing facilities in Croatia, have been producing uniform boots since the nineties and have a strong reputation with the German Armed Forces and those of several other NATO nations. They were successful in the first three above categories and indeed are the only manufacturer selected to supply three different styles of brown boot for UK MoD out of seven successful companies (one contractor is supplying five categories but each boot in their range is manufactured by a different company).

At time of writing… we have now had wear test examples of all three pairs of HAIX boots, all labelled as manufactured in November 2012, under user trials for over five weeks and we have been well impressed. The HAIX DESERT COMBAT HIGH LIABILITY (DCHL) boots have only had light wear, and probably won’t get a bashing in a desert environment until the spring, but both the HAIX COLD WET WEATHER (CWW) and HAIX COMBAT HIGH LIABILITY (CHL) boots have been alternating on my feet pretty much on a daily basis. Indeed during that bout of cold November rains which hammered the UK, causing widespread flooding, it was the CWW which kept my Size 10 feet warm and dry.

The CWW, of which a minimum of almost a quarter of a million pairs are estimated to be required by UK MoD from the two successful companies in this category (HAIX and KARRIMOR SF) over the next four years, is a waterproof full leather upper, highish leg combat boot designed specifically for winter and cold climate wear. It has a 4-layer Gore-Tex breathable laminate in its construction to keep out water yet still let the foot breathe, a highly abrasion-resistant lining with a fleece mid-layer for insulation, and it incorporates the HAIX climate and MicroSoftLight mid-sole systems.

This is quite a heavy boot with my UK10 examples tipping the scales at around 975 grammes apiece; almost exactly the same as their KARRIMOR SF equivalent in the CWW category. Measuring 10 inches or 250mm from sole to padded collar at the rear (UK10) this boot has an integrated leather tongue extending to 9 inches or 225mm to prevent water ingress. There are eight pairs of lace eyelets with the bottom four pairs being pull-through, the lace lock being the neat unique HAIX locking D-ring type, and the top three being open hooks for speed lacing. There is also a lone lace hook on the tongue to hold it securely in place.

The CHL, or which it is expected more than 400,000 will be procured from HAIX and category competitor Alt-Berg (Defender model) over the four years, is curiously almost exactly the same weight as the HAIX CWW even though it does not give the impression of being as heavily padded plus it is a little bit lower at the back. Effectively the standard temperate theatre boot, its uppers are a combination of leather and textile but it also has a Gore-Tex breathable membrane and its mid-sole and outsole are similar to the CWW boot.

Available in both half and full sizes, the HAIX CHL boot measures roughly 9 inches or 225mm from sole to scalloped heel (better for driving or if vehicle borne) in UK 10 and the tongue gusset extends to 8 inches or 200mm. This boot style only has six pairs of lace eyelets, all of which except tor the D-ring lace lock are of the pull-though type. I actually prefer my upper eyelets to be open hook (I am now way too old to voluntarily throw myself out of a perfectly serviceable aircraft so don’t need to consider snagging rigging lines) but I actually have found these pull-through eyelets to be pretty good. Full marks here HAIX.

The DCHL from HAIX looks almost identical to their CHL model but it is a combination of suede and textile rather than shiny leather and textile. Of course the other main difference is that no Gore-Tex membrane or insulation is required so about 50 grammes per boot can be shaved off the weight. This one is up against Meindl (Desert Fox PRO) in this category and it is anticipated that close to half a million pairs will be procured from the two manufacturers over the four years. We will give you an appraisal of how these fare in a desert environment later in the year.

All three HAIX boots use the same Davos antistatic slip-resistant outsole tread, and having worn this during that nasty early December cold snap I have to say I am impressed by its qualities. It also seems to self-clear quite well in the mud.