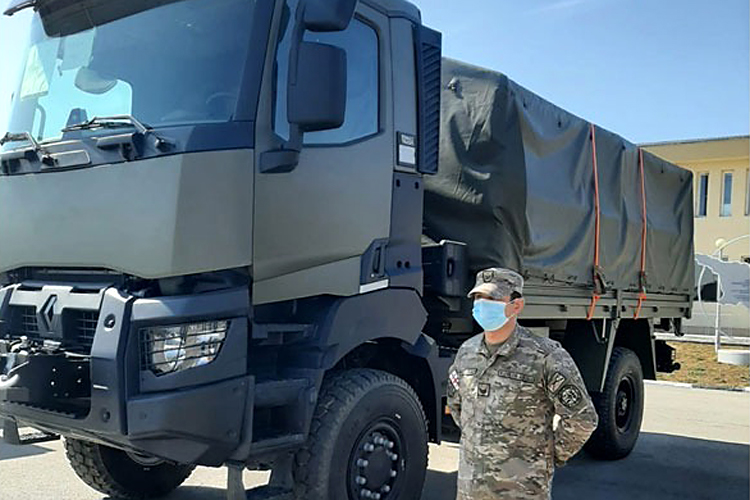 NSPA delivers second batch of training vehicles to JTEC in Georgia as part of the Substantive NATO-Georgia Package project.

NSPA Press release, Luxembourg, March 2021: On 10 March 2021, the NATO Support and Procurement Agency (NSPA) handed over the last five of 20 heavy vehicles and equipment to the Georgian Ministry of Defence, as part of the Substantive NATO-Georgia Package. The vehicles will join the MoD fleet and will be used as training support vehicles at the NATO-Georgian Joint Training and Evaluation Centre.

The handover ceremony was held in Tbilisi, the capital of the country, to mark the significant milestone and the closure of the project. Georgian Deputy Minister of Defence, Mr Zurab Azarashvili, Deputy Chief of Defence Staff, Major General Zaza Chkaidze, NATO Liaison Office representative, Ms Pirit Pikker, and NSPA and Georgian officers attended the event.

The 20 vehicles have been customised to meet the requirements of the Joint Training and Evaluation Centre and of the Georgian Armed Forces. They consist of one ambulance, two minivans, twelve Toyota Hilux and five trucks. The project is funded by NATO Defence Capacity Building with contributions from Denmark, Germany, Hungary, Italy, Lithuania, Portugal, Turkey and the United Kingdom under Norway leadership.

Since 2014, a Substantial NATO-Georgia Package has contributed to Georgia’s defence capabilities. The Joint Training and Evaluation Centre is one of the initiatives carried out within the framework of the Substantive NATO-Georgia Package and aims to assist Georgia providing training, evaluation and certification opportunities for increased operational preparedness and interoperability of Georgian Armed Forces. This enables them to work alongside NATO and partner forces and offer multi-national training and exercise opportunities. Ultimately, the Substantial NATO-Georgia Package is also aimed to prepare for Georgia’s eventual NATO membership.

Georgia is one of the Alliance’s closest partners, part of the Partnership for Peace programme. The country actively contributes to NATO-led operations and cooperates with Allies and other partner countries in many other areas. NSPA has been supporting Georgia for many years, with the aim to strengthen and modernize its security and defence capabilities through a number of Trust Fund projects. This has helped Georgia to safely dispose of stockpiles of surplus and obsolete weapons and munitions, and to clear mines and unexploded munitions. The procurement of 20 training vehicles to support Georgian operational interoperability is the latest project developed by the Agency in support to the NATO partner.