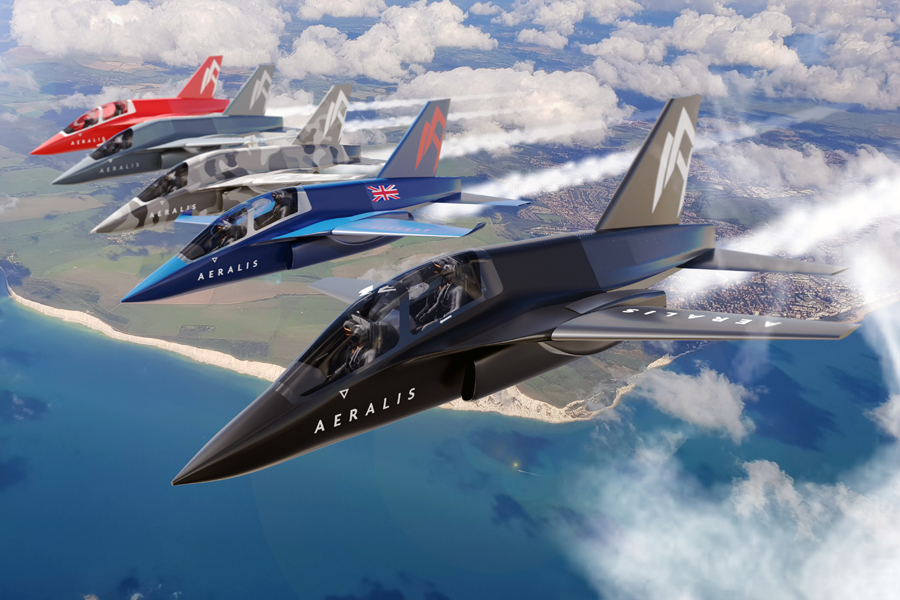 Thales in the UK is to support AERALIS in the development of training & simulation for an Advanced Modular Aircraft.

Press Release, London, 09 March 2021: AERALIS, the British military jet developer, has entered into a Teaming Agreement with Thales in the UK to develop innovative philosophies, processes, devices & systems to operate the transformational AERALIS platforms. The development from Thales will take place alongside AERALIS’ contract with the RAF’s Rapid Capabilities Office to deliver research & development of an Advanced Modular Aircraft system.

AERALIS is redefining the possibilities for light military jet aircraft across various roles in the defence market including training, aggressor and light combat, focusing on a UK-based development and production programme of an agile, modular, and commercially driven aircraft system aimed at increasing capability whilst significantly reducing through-life costs for customers. As they move to develop and certify a broad range of future aircraft systems to support the Royal Air Force’s ambition to rationalise its future fleet, they will be working in parallel with Thales in the UK to ensure that the training systems required to teach pilots to fly AERALIS will be ready in conjunction with the modular aircraft system.

AERALIS plans for its aircraft system to be offered as part of innovative training solutions to customers across all aspects of both flying and operational training, and next-generation synthetic training devices and simulators will be a vital part of this process. With a well-established Training and Simulation division that designs and operates synthetic flight training simulators, such as those used at the RAF’s Voyager and Atlas training facilities at RAF Brize Norton, Thales in the UK will bring to bear many of its latest training solutions to complement the AERALIS system to ensure ground-breaking solutions for customers.

“Thales has been a long-term supporter of the AERALIS ambition to deliver innovative and cost-effective solutions for our armed forces. We are therefore delighted to enter this further Teaming Agreement to realise our joint aspirations, which further support the Royal Air Force goals for thier Project ASTRA journey towards a Next Generation Air Force” quoted Darryn (Daz) Rawlins OBE, Managing Director of Thales Training & Simulation, UK Domain.

With both parties working with the RAF’s Rapid Capabilities Office, Thales world-class Synthetic Training Equipment and aircrew training systems will complement AERALIS’ development of its all-British modular aircraft system. Support for AERALIS from both the RAF and Thales in the UK demonstrates the great confidence placed in British innovation and ingenuity for a project which has the potential to reinvigorate British aircraft manufacturing using the wealth of infrastructure and expertise that already exists in the UK.

AERALIS CEO, Tristan Crawford said: “We are proud to be working with Thales, whose expertise in Synthetic Training solutions will augment our own innovative open-architecture aircraft and allow us to offer real options for UK-developed whole aircraft & training systems for the future of the Royal Air Force. This partnership will provide solid foundations for the support of the Future Combat Air System and the RAF future fleet, whilst also revitalising the British whole aircraft design & manufacturing industry.”