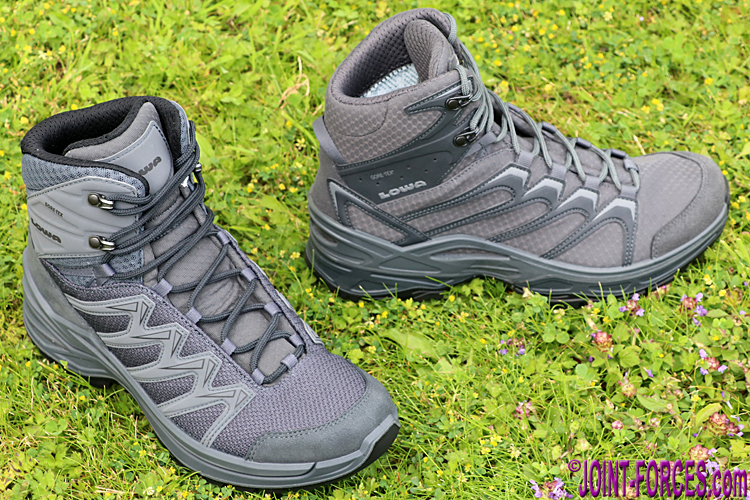 This new LOWA INNOX PRO GTX MID TF lightweight boot is an update to a well-proven model, first seen four years ago, to which I admit to being a bit biased, writes Bob Morrison.

As previously mentioned on more than one occasion, I have worn LOWA INNOX boots since they first appeared in the UK in the summer of 2015 as an everyday mid-height boot which I alternate with their HAIX Black Eagle equivalent when I am not testing other boots.

From mid-2015 for around twelve months I wore a pair of Coyote Brown original mid-height Innox GTX boots on many of my assignments including, among other exercises; SOUTHWEST WADER, on the Cornish Coast; TRIDENT JUNCTURE, on Spain’s Chinchilla and San Gregorio training areas and the beach at Tróia in Portugal; TRACTABLE and GRIFFIN STRIKE, on Salisbury Plain; SHAMAL STORM in central southern Jordan; and ANAKONDA, on four different training areas across Poland. During this extended test period, at a time when the UK combat boot scene was in limbo pending a new MoD contract, on a second trip out to the Hashemite Kingdom I also covered a WARRIOR COMPETITION and a SOFEX exhibition, with a weekend off in between spent exploring Petra.

Eventually these brown INNOX boots lost much of their tread, which is unsurprising bearing how much trekking I did on hard surfaces and over rough terrain while usually carrying 15-20kg on my back, in addition to at least twice that weight in pre-consumed and stored about my person survival rations (honest Doc, I’m not overweight but just eating ahead and storing food as fat in case natural disasters should unexpectedly strike). Eventually the fabric uppers of these boots began to wear at the crease points on top of the toes, but the Gore-Tex inner ‘sock’ in each boot maintained its integrity to the very end meaning they were still waterproof.

In late Winter 2017/18, as the ‘Beast From The East’ battered Western Europe, stranding me for days on a trip back from Bonn when the runways at first Manchester and then Exeter airports were closed, I was now wearing a near new replacement pair of black INNOX GTX boots and found them to be both grippy and waterproof as I trudged through the snows. Although they only have the non-insulated three-ply Gore-Tex Extended Comfort membrane (as per the current UK Forces Combat High Liability Boot from AKU) which is designed as a warm weather high heat loss lining, wearing sensible cold weather socks with the INNOX boots turns them into a comfortable, three/four season waterproof lightweight patrol boot. These black LOWA boots have now seen about 16 months of regular wear, alternating them with my black HAIX Black Eagle mid-height boots, but there is still plenty of life in them yet. However when Task Force Distribution, the UK distributors of LOWA military and blue light services footwear, gave me a pair of the hot off the production line INNOX PRO GTX boots at OTS 2019 I just had to try them out to see if there was any major difference.

For the last twelve days I have only worn these new INNOX PRO GTX MID TF boots, putting them on when I leave the house after, and sometimes before, breakfast and not taking them off again until bedtime. In addition to spending a very long day on my feet travelling to, and walking around, the 3CDSE exhibition at Great Malvern these boots have also been out and about on commons near Lympstone, along stretches of the South West Coast Path, and on the beaches of the Jurassic Coast. I have walked over a wide variety of terrain, both man-made and natural, while wearing them and although they have a new tread pattern I have not yet found them to be any less capable than their predecessors.

As you might be able to spot from the lead photo, the new boot is fractionally higher at the rear; I reckon about 12mm / 0.5” for an EU 45/UK 10.5 boot. Not immediately obvious is that the new model’s outsole (LOWA Multi Trac) is slightly narrower, roughly 6mm or 0.25” at its widest point, than the LOWA NXT sole. This Multi Trac sole unit also has moulded grip ridges on both the instep and directly opposite and the angular tread blocks are more linear with no oval pads down the centreline. On the upper sides, the ankle protecting rubber section is both a little higher and now one-piece, extending around the Achilles tendon area, and there is an additional mesh padding section above with more suede leather around the lower heel cup.

The microfibre and synthetic fabric main uppers have a larger, and visually more robust-looking, weave and the external strengthening skeleton is redesigned. The lacing system is almost identical on both models, with five lower pairs of fabric loops plus two upper pairs of metal tunnels. The padded tongue is slightly lower on the new boot but the gusset web is the same height. Internally, the boot has a comfortable, removable ATC Climate Control footbed. Finally, the rear tape loop for easing the boot on at the rear is now vertical rather than horizontal.

Ten days on test is not enough time to tell if the new INNOX PRO GTX model will be as long-lasting as its predecessor, but is is sufficient time to say that this boot is every bit as comfortable as the original INNOX GTX. The new boots took no breaking in whatsoever and it was hard to believe that they were not the ultra-comfortable boots that I have been wearing every other day since March 2018. Needless to say, I heartily recommend these if you are looking for an ultra-lightweight patrol boot or just for something smart and functional to wear on the promenade and down to the pub.

Now the bad news. Task Force Distribution, who handle the police and military business for LOWA in the UK, tell us that it is likely to be later this year before sufficient stocks of the new INNOX PRO GTX MID TF boot are available for private purchase.