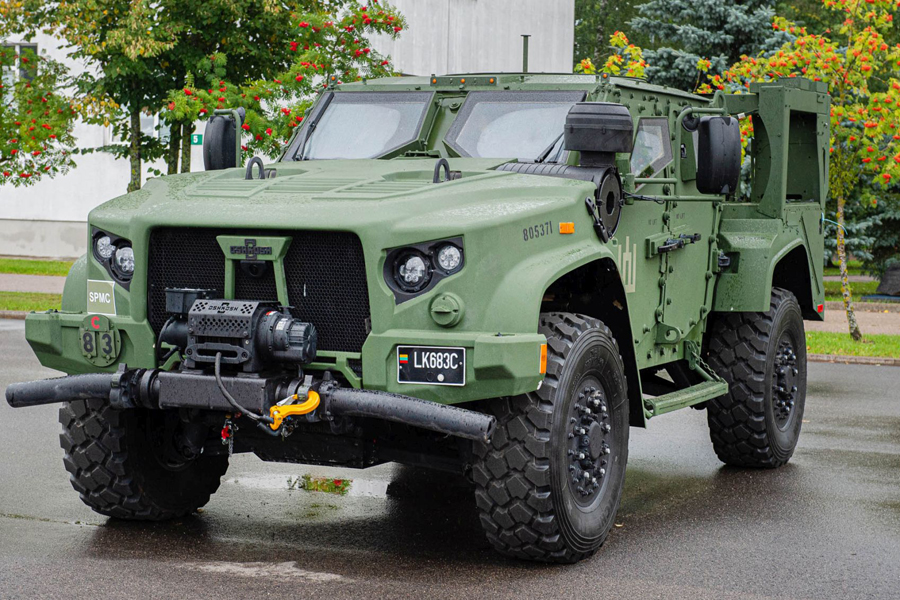 The new JLTV (Joint Light Tactical Vehicle) fleet of the Lithuanian Armed Forces was last week presented to the public at Rukla.

Press Release, Vilnius, August 2021: On August 17 the first Joint Light Tactical Vehicles (JLTVs) procured by the Lithuanian Armed Forces from the United States of America were unveiled publicly in Rukla. At the ceremony held at the Iron Wolf Mechanised Infantry Brigade, Vice Minster of National Defence Margiris Abukevičius said that the acquisition was a particularly important step in the modernisation of the Lithuanian Armed Forces.

“I am really happy to be here on this occasion, presenting in Lithuania the purchased JLTVs. This is an important step towards in the modernisation of the Lithuanian Armed Forces. We are very happy about our increasing military cooperation with the US, while this project really contributes and shows our willingness and action in protecting the NATO eastern flank,” Vice Minister M. Abukevičius said.

The first JLTV shipment that has arrived in Lithuania includes 50 vehicles. The JLTVs were shipped from the US to Germany by sea and then were brought to Lithuania by car transporters. The first JLTVs were assigned to the Lithuanian Armed Forces training units in Rukla and Kazlų Rūda and personnel training began. Several tens of drivers and 15 technical service personnel have already been fully trained. `

The JLTV is currently the most state-of-the-art light tactical vehicle with particularly advanced characteristics. According to the contract signed by the Ministry of National Defence of Lithuania and the United States Government in 2019, 200 such vehicles will be procured for the Lithuanian Armed Forces. The JLTVs are made by Oshkosh Defense, the manufacturer of choice of the US Government.

The new vehicles will be dedicated to the battalions of the Lithuanian Armed Forces ‘Iron Wolf’ and ‘Griffin’ Brigades, with a priority on the national rapid response force.

“The JLTVs are technologically advanced all-terrain vehicles with a high personnel protection. They will increase the current safety level of our troops and our efficiency in surveillance, artillery and air support tasks. This new capability has been manufactured according to the Lithuanian Armed Forces requirements and it will enhance our capacity to perform national defence tasks, to perform tasks in international operations, and last but not least, to be more interoperable with the United States forces,” said M. Abukevičius.

“Today we mark the beginning of implementation of the Joint Light Tactical Vehicle project with our strategic ally Lithuania. I would like to say on behalf of the US Government that we are very, very happy that Lithuania conducts its Armed Forces upgrade with US weaponry and equipment,” said Ambassador of the United States to Lithuania HE R. Gilchrist at the roll-out ceremony.

”Lithuania is further committing 2% of your GDP to defence, and the commitment of your country to defence capability modernisation strengthens collective security and benefits the entire NATO Alliance. The JLTV acquisition confirms the Lithuanian willingness to defend its territorial integrity against any threat,” Ambassador added.

The all-terrain JLTVs will have mounted turrets and M2 QCB 12.7mm machine guns. The vehicles in the present JLTV shipment and turrets arrived separately, the equipment will be assembled in the nearest while. The contract between Lithuania and the US covers the JLTC platform equipment, weaponry, personnel training, spares and maintenance, transportation, and equipment assembly. The procured JLTVs, equipment, weapons, tools, and spares will be delivered to the Lithuanian Armed Forces in full by 2024.