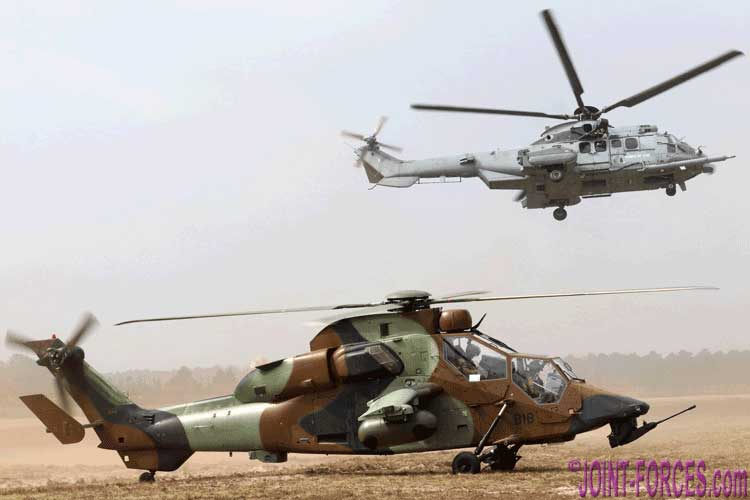 To recap for the tranche of new viewers who have found JOINT-FORCES.com since Album 1 and Album 2 were published: Teams from the three primary components of Army Special Forces Command (Commandement des Forces Spéciales Terre or COM FST) along with a team from Navy Special Forces (Force des Fusiliers Marins et Commandos or FORFUSCO) all took part supported by a C-160 Transall and two Dassault Rafale multi-role jets from the French Air Force (Armée de l’Air).

This album focuses on the third major component of COM FST, the 4th Special Forces Helicopter Regiment (4e Régiment d’Hélicoptères des Forces Spéciales or 4e RHFS). The primary role of this almost 500-strong formation and their fleet of around 40 helicopters is to support French Army Special Forces teams from 1er Régiment de Parachutistes d’Infanterie de Marine (1er RPIMa) and 13e Régiment de Dragons Parachutistes (13e RDP) as well as, when circumstances dictate, French Navy and Air Force SF teams. At present four primary types of helicopter – EC 725 CARACAL, SA-342 GAZELLE, EC 665 TIGRE and AS 532 COUGAR / AS 332 SUPER PUMA – are used by 4e RHFS and one example of each was used during the dynamic displays.

Starting with the EC 665 TIGRE/TIGER, this is a twin-engined attack helicopter crewed by two and the Western European equivalent of the US AH-64 APACHE or the Russian Mi-28 HAVOC. Known in French Army Light Aviation (ALAT) service as the Hélicoptère d’Appui Protection (HAP) or Support Protection Helicopter, the TIGRE has a 30mm GIAT cannon in a chin turret, 37mm SNEB rockets &/or 20mm cannons on stub wings, and MISTRAL air-to-air rockets. The type is also flown by Australia, Germany and Spain. During the dynamic display it operated in tandem with a SA-342 GAZELLE providing ground support for the troops as well as riding shotgun for the transport helicopters.

The SA-342 GAZELLE gives 4e RHFS a light, and easily air transportable over long distances, utility helicopter for reconnaissance and liaison duties which can also be armed to give ground support to Special Forces operators. Widely used by ALAT, and operationally deployed many times over the last 35 years, the helicopter can seat five in standard configuration but when flown by 4e RHFS the crew is normally three – pilot, co-pilot and gunner. Its armament is a Dillon M134 7.62mm minigun. During the SOFINS display the GAZELLE made several passes and when an insurgent team armed with a GRAIL missile posed a threat the minigun (firing blanks of course) was used to neutralise them.

The AS 532 COUGAR and AS 332 SUPER PUMA are both derivatives of the SA 330 PUMA medium transport helicopter and 4e RHFS has both models in its inventory. The helicopter which inserted the FORFUSCO Commando team sent in to recover the High Value Hostage during the display was a AS532UL COUGAR, nose code CGV. The COUGAR can carry up to 28 troops, or six stretcher casualties plus ten troops, in addition to a crew of three – pilot, co-pilot and loadmaster/gunner – or alternatively up to 4,500kg of underslung cargo. These aircraft, along with the earlier SUPER PUMA, form the backbone of the 4e RHFS Transport Flights.

Finally, the EC 725 CARACAL is the most modern evolution of the PUMA helicopter family. It is believed that 4e RHFS currently have ten of these aircraft which will be replaced by a similar number of Special Forces variants of the NH90 Caïman, with the first six due to be operational no later than 2025. The light grey CARACAL which participated in the display recovered the Commando team using an AirTEP fast extraction net (which we will cover in a future article).

In the 4th album in this series, if all goes to plan, we will look at the FORFUSCO contribution.