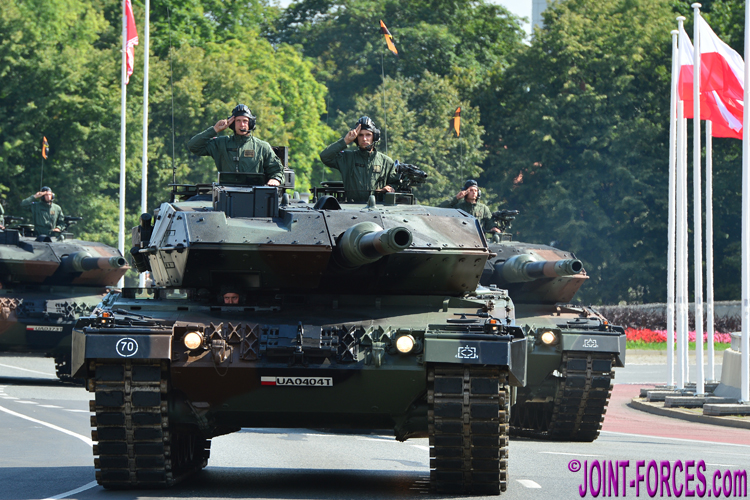 Every year on the 15th of August the people of Poland celebrate the Feast of the Polish Armed Forces, and yesterday JOINT-FORCES joined the party, writes Carl Schulze.

This date was chosen due to the fact that on that day in 1920, during the Polish-Soviet War (14 February 1919 to 18 March 1921), the almost beaten Polish Army defeated the Red Army outside the gates of Warsaw and by doing so saved Poland’s independence. A key part of the celebrations is a massive military parade, usually held in Warsaw. This year, due to it being the 100th anniversary of the beginning of the Silesian Uprising, the parade was held at Katowice in Silesia.

Starting around 14:30 the massive military parade, under the motto ‘Faithful to Poland’, included some 2,600 troops with 60 rotary and fixed wing aircraft and about 185 wheeled and tracked combat vehicles. In addition to troops from Poland, the parade saw the participation of detachments from Canada, Estonia, Romania, the United Kingdom and the United States of America. The audience viewing the parade was spearheaded by the President of Poland, Andrzej Duda, hundreds of VIPs and several tens of thousands of spectators.

Lead by the Pułk Reprezentacyjny Wojska Polskiego or Representative Honour Guard Regiment of the Polish Armed Forces, it started with a march past of various units of the Special Forces, Land Forces, Air Forces and Navy of the Armed Forces of Poland. Among the formations represented were the 6 Brygada Powietrznodesantowa (airborne brigade), the 25 Brygada Kawalerii Powietrznej (air assault brigade), the Jednostka Wojskowa AGAT (Special Forces Ranger Unit), the 12 Brygady Zmechanizowanej (mechanized infantry brigade) and the 1 Pomorska Brygada Logistyczna (logistic brigade).

International vehicles participating in the parade included two M1A2 SEP MBTs of the US Army and a single Jackal MWMIK of the Royal Scots Dragoon Guards.