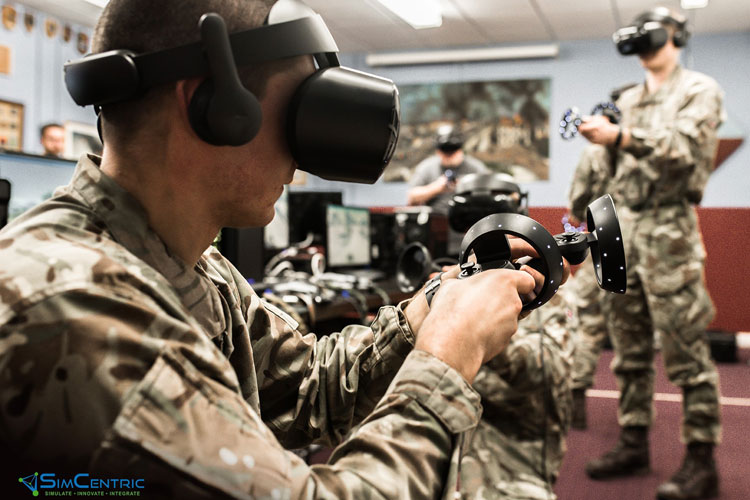 SimCentric has been awarded a contract to conduct Platoon-level Virtual Reality collective training trials in the UK using their SAF-TAC platform.

Press Release, Oxford, 05 March 2020: The United Kingdom Ministry of Defence (UK MoD) has awarded a rapid impact contract to SimCentric in order to assess, validate and trial their Virtual Reality (VR) platform SAF-TAC, built on the Unreal Engine 4 (UE4). Awarded through the Defence and Security Accelerator (DASA), the contract will focus on identifying and quantifying the potential value of VR for collective training across the UK Armed Forces.

Working alongside members of the Royal Marines, Army and Royal Air Force this tri-service set of trials will run throughout 2020 and focus on three major areas:

SAF-TAC is a Virtual Reality-based point-of-need collective training application built on top of the UE4 game engine. It is built with the design philosophy that Virtual Reality is more than just virtual reality goggles plugged into a desktop-based simulation. Instead SAF-TAC maximises the combination of intuitive gesture control designed to match real soldier actions, rich sensory feedback including HD surround sound, haptic feedback and high-fidelity visuals, and bespoke training scenarios tailored for VR interaction. SimCentric has used the term ‘Immersive Reality’ to describe this full rich immersive experience, which exceeds the level of immersion normally attributed to VR in simulation.

Matt Smith, Dstl said “Partnering with SimCentric on the SAF-TAC trials will provide a great opportunity to understand the requirements of dismounted infantry VR simulations and provide valuable de-risking data to MOD on the use of these systems in team and collective training”

One of the key enabling technologies underpinning the SAF-TAC platform is UE4. This game-engine technology brings the high-quality visual environment, ultra-high framerates, cost effective content creation pipeline, and rich experience associated with cutting-edge AAA games to the simulation industry. This will be the largest UE4-based VR trial conducted for the UK MOD.

Immersive Reality technologies have the potential to transform training within the UK MOD, providing affordable and effective capability that is better able to bridge the gap between synthetic and live training.

Tom Constable Director of Innovation at SimCentric commented: “We’re thrilled to have this opportunity to work so closely with the UK MOD. The DASA contract will allow us to conduct assessment, validation and trials of our Immersive Reality SAF-TAC platform with unprecedented access and support across all three services. We believe that tri-service user feedback is key to ensuring our platform is flexible, relevant and, crucially, able to support interoperability between Units and Services.”

Footnote: UK MoD has today (6th March) stated: “After initial successful trials with the Parachute Regiment and officers at the Infantry Training Centre, Catterick, further tests with the Army, RAF and Royal Marines will take place later this year.” and “The virtual simulator will be part of the Armed Forces wider training programme, and will be used to support and enhance real life training exercises.”

Featured, SAF-TAC, SimCentric, Virtual Reality, VR
You may also like