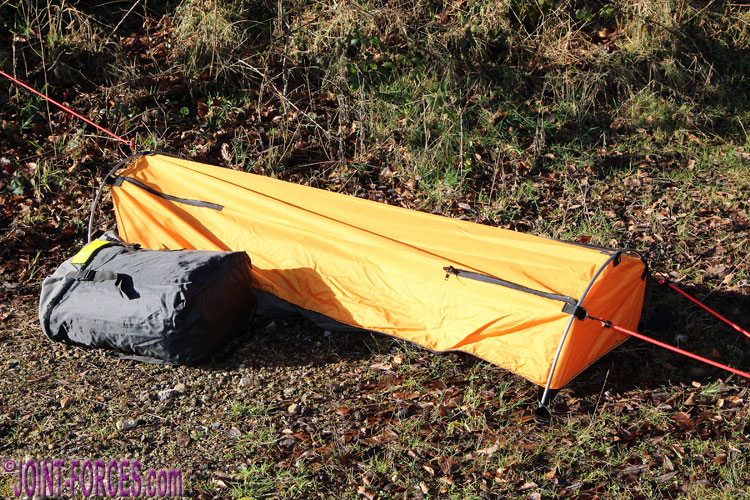 This unique daysack concept from PROTAC, which is available in both military camouflage patterns and civilian colours, is attracting considerable attention from some European armies as it offers both personal shelter and load carriage solutions in one pack.

PROTAC (i.e. Professional Tactical) Equipment Ltd. which is based at Curragh Camp, the home of the Army branch of the Irish Defence Forces, was established over twenty years ago by a former NCO who deployed operationally with the United Nations. The company, which many military or emergency services readers in the Republic of Ireland will be well aware of, both manufactures and retails military kit.

The PROTAC daysack we are primarily focusing on is from a family of three slight variation bag types, designed on the same principle but with totally different uses. The 35-litre capacity Shelt-R’Bag converts into a one-man hooped bivvy, the Stretch-R’Bag becomes an lightweight stretcher and the Range-R’Bag unfolds into a sniper or shooting mat; the curious spellings being a necessity for the patents and trademark process.

Designed and developed by the husband and wife team of Sean and Eileen Curtis, the Shelt-R’Bag and its siblings stopped off on their way from the Irish Republic to Continental Europe so that we could both see them being assembled and photograph the process. Unveiled a European Homeland Security expo in late 2017 the system had much greater interest than anticipated, hence this week-long Grand Tour in February of potential military customers in four NATO nations.

As I have previously said elsewhere: The easiest way of describing this system is probably bag-in-a-bag, as the shelter or stretcher etc. forms an outer bag with shoulder straps and waistbelt, inside which there is a second and more lightweight bag with its own simple shoulder straps. When the inner bag, complete with contents, is removed the outer can be unzipped to form the shelter or stretcher; if optional side pouches and/or MOLLE/PALS panels have been fitted to the outer, they can be speedily removed and ingeniously re-affixed to the inner bag to bit stiffen it up and expand its capacity. A very neat idea.

Turning first to the Shelt-R’Bag, the hooped bivvy assembly which forms the daysack outer can be in any military camouflage pattern the customer specifies or in a plain colour for police or civilian use etc. The curved upper section of the bivvy, which can be in camo colours for tactical use or dayglo shades for emergency use, is formed with collapsible hoops at head and tail plus guy ropes or bungees attached to D-rings in conventional style. The outer surface of the bag, which is made from tough waterproof nylon, becomes the base of the shelter once unzipped and unfolded. The entire assembly process should take well under 90 seconds; see the YouTube links on the protac.ie website for demonstrations of this.

Inner bag (left) and outer which converts into a shelter [© BM]

Sean started off his demo by assembling a grey Shelt-R’Bag (see lead photo) with dayglo orange bivvy, aimed primarily at the civilian hiking and trekking market but which also has potential for mountain rescue and adventure training team leaders. After unzipping and unfolding, the base was stretched out and secured with simple tent pegs, the two hoops were assembled and fed through the hems, then bungees were clipped on to either hoop (one to a tent peg and the other to a tree sapling) to form a one-person tent. The inner bag, containing all the daysack’s contents, was set to one side.

Outer casing unzips and converts into a bivvy bag [© BM]

Next Sean turned to the camouflage pattern daysack, in Irish Defence Force camo, which on the face of things looked like a pretty conventional military light pack with side pouches and MOLLE/PALS (i.e. Pouch Attachment Ladder System) tapes on the front face. After unzipping and unclipping pouches and PALS panel and then unzipping the outer bag, this too turned into a hooped bivvy, in camo pattern this time, leaving an olive green inner bag to which pouches and panel could be affixed. This configuration allows a soldier to set up their one-person tent in a harbour area but still carry their gear on patrol… or bug out with essential kit if disturbed in the night.

Collapsible hoops are stowed in pocket inside the bivvy [© BM]

The third daysack demonstrated, manufactured in plain olive green, was a Stretch-R’Bag which even more speedily unzipped to give a full size emergency stretcher. Again the inner bag, in this case probably containing medical kit, could be extracted and transported separately by way of its inbuilt straps. The Range-R’Bag works on exactly the same principle, but space prevents us including that variant here.

If interested in buying this system, ProTac have set up a standalone e-commerce site at sheltrbag.com through which the range can be ordered. Some popular colours are kept on the shelf but others, including in MultiCam/MTP-compliant camo, can be supplied at short notice as all items are manufactured in Ireland using ProTac’s own machinists. IDF camo pattern, however, is only available to those entitled to use it.

PALS/MOLLE panels can be zipped onto the inner bag [© BM]