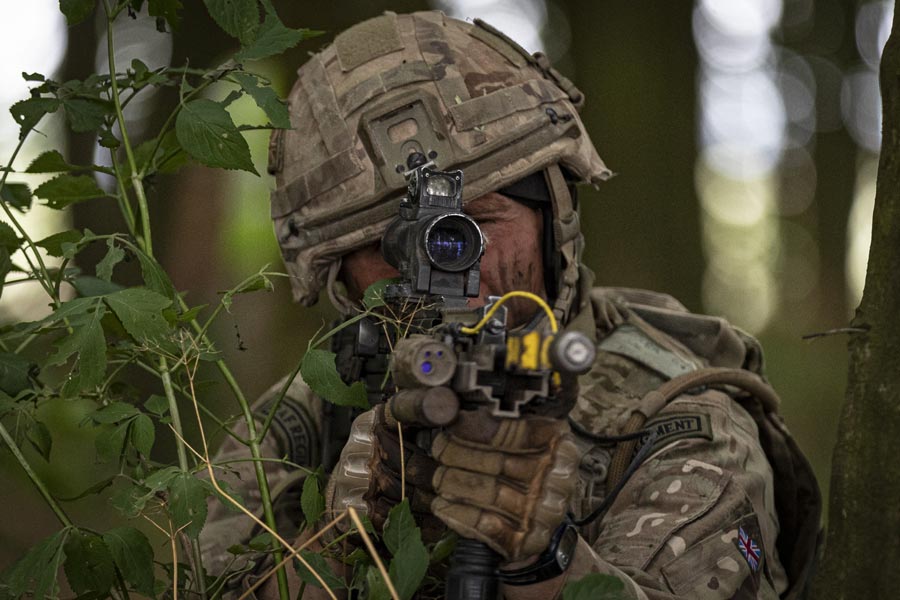 7 RAF Force Protection Wing are a specialist Air Force Protection unit, responsible for the protection of RAF air assets in the UK and when deployed worldwide. The Wing conducted a range of specialist training activities during Exercise BLAZING CHARIOT, to refresh their specialist skill-set. This included Force Protection Air Estimate training and Wing command and control of operational activity in and around an airfield. 1 Squadron RAF Regiment practised their use of Foxhound Armoured Vehicles, as well as flight level tactics and procedures, to ensure they’re ready to support operations in the UK and short-notice RAF deployments overseas. This culminated with a Squadron level dawn-raid, under the watch of RAF Force Protection Centre mentors and observers.

Whilst deployed, the Wing undertook experimentation with new equipment, including Small-Unmanned Air Systems (UAS) from the RAF Force Protection Centre, trialling different techniques to support hostile force detection, situational awareness, and training feedback. Attached RAF Intelligence specialist personnel provided information on hostile force action, which improved and helped situational awareness, allowing commanders’ decision making to be practised with a rapidly changing situation. The Exercise forms part of Force Protection Force operational training requirements and 7 Wing operational readiness training. The aim is to ensure the units are ready to support RAF operations in the UK and overseas to prevent hostile interference with air operations and damage to RAF aircraft when vulnerable on the ground.

How the exercise achieved the objectives: The Exercise achieved all training set and it was a hugely beneficial Collective Trg experience. The Force Protection Air Estimate refresher training package was particularly valuable for the Wing HQ, enhancing staff understanding and development of the team; importantly, it provides a framework for how the Wing will meet future operational tasks. It also provided an opportunity to understand Armoured Vehicle use and effectively incorporate minute to minute command and control as part of our specialist Air Force Protection role. This further enhanced the understanding of operations in the complex air-ground environment in and around an RAF airfield, augmenting the experience from the unit’s participation in the NATO Capability Evaluation earlier this year.

Editor’s Comment: It is interesting to see that the RAF Regiment is still going strong as it has been many years since any of our specialist defence photojournalist team has been invited to provide independent coverage of the activities of this comparatively small yet important, but often forgotten, element of the Royal Air Force.

Footnote: Only a single generic image caption covering BLAZING CHARIOT images has been provided by the RAF – the second vehicle seen in use by 1 Sqn RAF Regiment is a Land Rover Defender R-WMIK+.