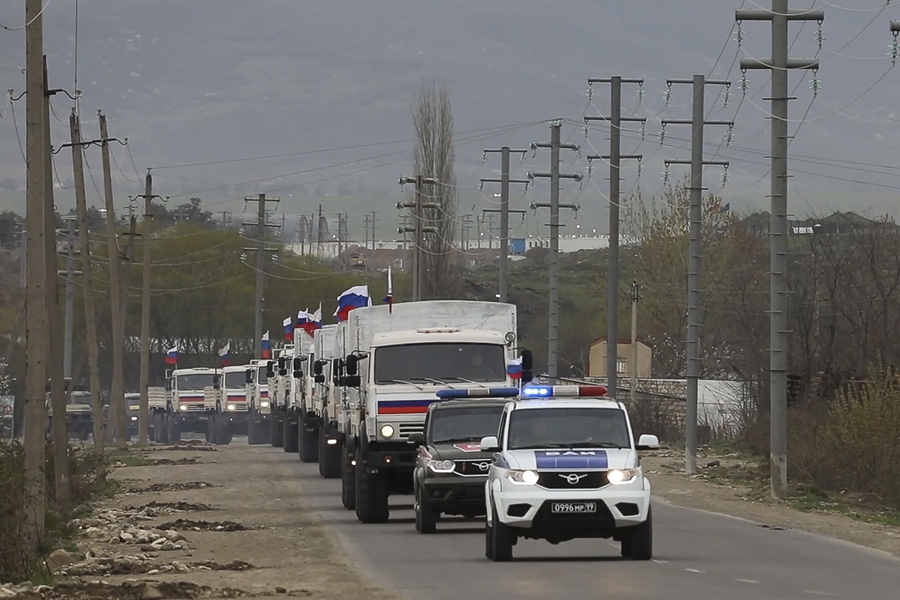 A column from the Russian Humanitarian Response Centre has delivered of 145 tons of aid to the Kelbajar district of Nagorno-Karabakh.

Russian MoD Press Release, 07 April 2021: The twelfth column of the Humanitarian Response Centre provided delivery of 145 tons of humanitarian cargo to the Kelbajar district The Russian peacekeeping contingent continues to ensure the transit of goods between the territories that came under the control of Azerbaijan in November 2020.

To restore energy supply and water supply systems to social facilities and residential buildings, the eleventh [sic] Russian convoy of the Humanitarian Response Centre, consisting of 15 KamAZ military vehicles and escort vehicles, proceeded along the Stepanakert – Madagiz – Kelbajar route and delivered 145 tons of cargo to the Kelbajar region. Including food, construction materials and equipment for the restoration of power supply systems. In total, with the assistance of Russian peacekeepers, about 2,100 tons of cargo were transported in seven convoys.

Assistance was rendered to the Azerbaijani side on the basis of the terms of the trilateral agreement between Russia, Armenia and Azerbaijan dated November 9 last year. In accordance with the agreements specified in the joint statement of the President of the Russian Federation, the President of the Republic of Azerbaijan and the Prime Minister of the Republic of Armenia, from 00:00 (Moscow time) on November 10, 2020, a complete ceasefire and all hostilities in Nagorno-Karabakh was announced.