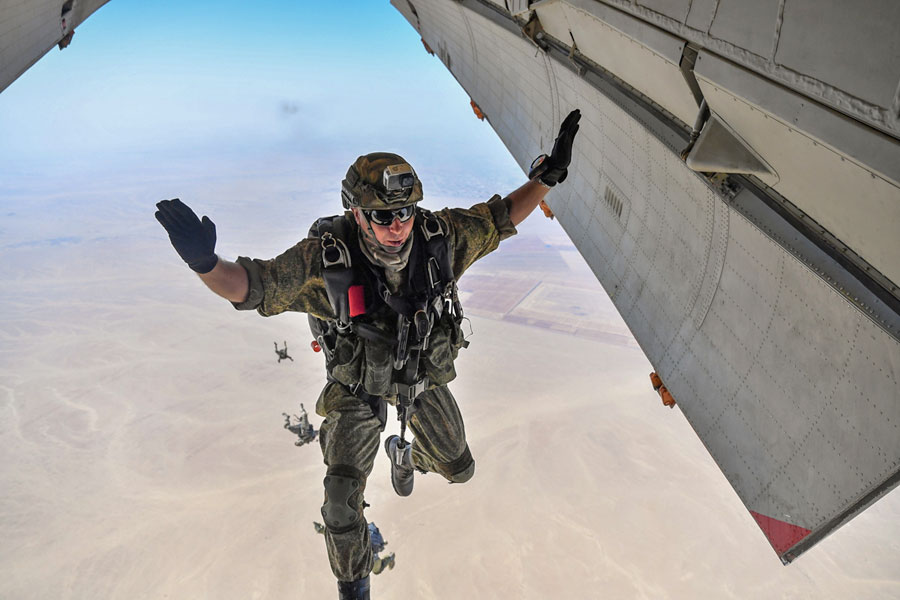 Russian and Egyptian paratroopers have conducted the active phase of the DEFENDERS OF FRIENDSHIP 2021 exercise at Inshas near Cairo.

News Release, Moscow, 28 October 2021: The final stage of DEFENDERS OF FRIENDSHIP 2021 joint exercise of Russian and Egyptian paratroopers ended on Wednesday near Cairo.

The active phase of the exercise with practical landing and practising tactical actions was held at the tactical training ground of the Armed Forces of the Arab Republic of Egypt near Inshas city, 60 km from the Egyptian capital. The active phase of the exercise was attended by about 200 servicemen of the two countries, who landed on guided parachute systems for special purposes such as ‘Wing’ and D-10 in the Egyptian desert from heights of 600 to 3,500 metres.

According to the plan, after landing and assembling at the landing site, the paratroopers performed the element of capturing and holding the border settlement where the terrorists hide, with the task of freeing the hostages they had taken and further carrying out a humanitarian operation to provide assistance to the local population. The landing involved four Il-76MD military transport aircraft of the Russian Aerospace Forces, which delivered the personnel of the combined Russian-Egyptian unit and six BMD-2K-AU units with the PBS-916 parachute strap-down system to the landing area, as well as military transport aircraft C-130 Hercules and C-295 Casa, Chinook and Mi-17 of the Egyptian Air Force.

Welcoming the Russian and Egyptian paratroopers who took part in the active phase of the exercise, the Commander of the Airborne Troops Colonel-General Andrei Serdyukov thanked them for the successfully completed task and professional actions, wishing them success in their future service. Based on the results of the active phase of the exercise, the command of the combined contingent recorded the fulfilment of all assigned tasks, the absence of unforeseen incidents and circumstances or the failure of weapons, military and special equipment to work.

The exercise was attended by military attachés from a number of African states, as well as Russian Ambassador to Egypt Georgy Borisenko.