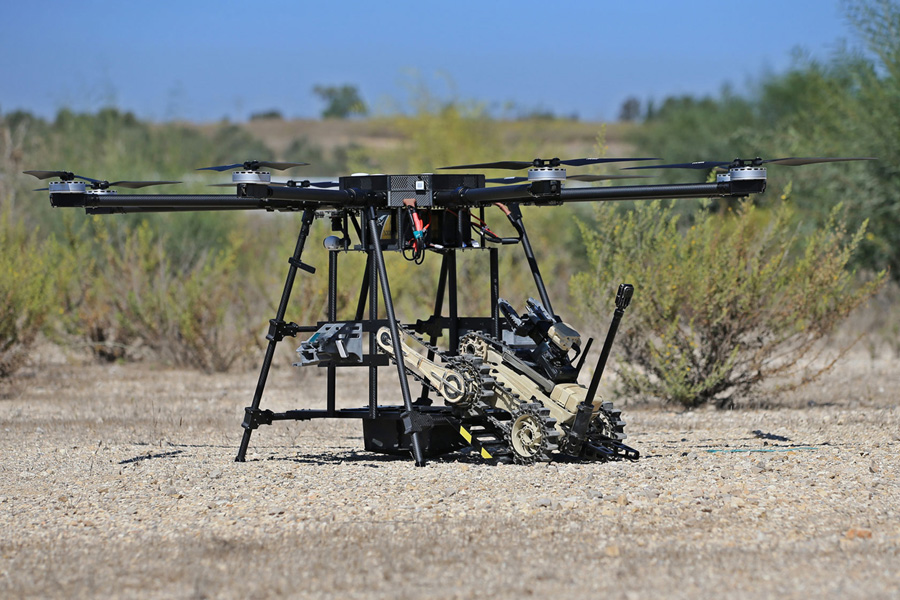 Heven Drones has partnered with Roboteam to launch the first ever flying robot UGV (Unmanned Ground Vehicle) at ISDEF in Israel.

From complete heavy lift-drones to flight controllers and operating systems, Heven develops the hardware and software that is enabling the next generation of autonomous & actionable drone platforms. The company initially started in homeland security but is rapidly moving into other fields, including logistics, construction, and more.

According to Bentzion Levinson, Heven Drone’s CEO, “At Heven Drones we set out to develop and bring to market unique drones which aren’t just flying cameras but flying robots that can complete a variety of tasks. Our collaboration with Roboteam brings our vision one step closer with land and aerial robots working together to create a fully operational product that can complete tasks from the ground and the air.”

The Heven Drones H100 Robo with Roboteam’s Micro Tactical Ground Robot (MTGR) has resulted in the first ever flying robot, which maximises time-to-lift capabilities of ground robots and flying robots. Bringing the best of both worlds, it is the first joint product of land and ground robot working together.

According to Matan Shirvi, Roboteam’s COO, “This collaboration allows for one unmanned aerial & ground complete system for delivering a significant payload to the battlefield with EOD capabilities. You can fly when you want to fly, drive when you want to drive, with one controller, one software and one radio – a single interface for maximising the operational range in the most difficult environments and complex terrains.”

The companies started working together for a mutual customer in the defence and homeland security industry. They are now exploring additional use cases for land and air robots to maximise efficiency in other applications.