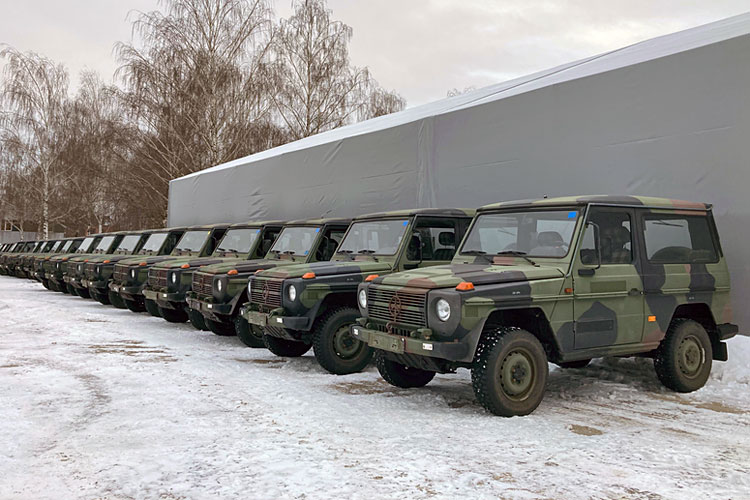 Former Dutch Armed Forces Geländewagens acquired by Lithuania have been issued to the National Defence Volunteer Force on the Belarus border.

Back in November the Defence Materiel Agency under the Ministry of National Defence signed a contract on acquisition of 356 items of second-hand military transport equipment from the Netherlands. As it has been agreed, the Netherlands Armed Forces will deliver to Lithuania 125 items of Mercedes-Benz GD 290 before the end of this year, most of the shipment will be given to National Defence Volunteer Force territorial units for state border guard operations. The volunteer troops are foreseen to ride the new purchase to serve in the border area with Belarus as soon as starting December 20.

“Our cooperation with the Netherlands Armed Forces is a long-standing and meaningful one. This contract will not only expand general-purpose Lithuanian Armed Forces capabilities but will also add efficiency to the patrols on the border area and response to the hybrid activity. At the same time, we are getting the equipment for the minimum price,” says Vice Minister of National Defence Vilius Semeška.

For the total sum of approx. EUR 6 million, the Netherlands Armed Forces will hand over the already used Mercedes-Benz GD 290 all-terrain vehicles, DAF trucks, trailers. The remaining part of the purchase – 165 Mercedes-Benz GD 290, 25 items of various DAF modifications, other equipment – will reach the Lithuanian Armed Forces in two parts next spring and autumn.