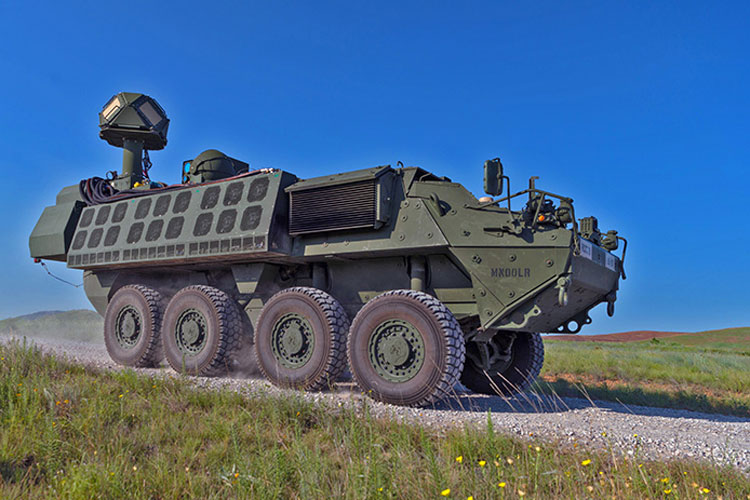 New DE M-SHORAD weapon zaps UAS & other threats ~ the US Army is to field a 50-kW laser on Stryker combat vehicles to protect convoys.

Raytheon News Release, 26 October 2021: The US Army could soon have a new weapon system in its arsenal to help defend soldiers during convoys and troop movements. It is a high-energy laser on an armoured vehicle.

Raytheon Intelligence & Space, a Raytheon Technologies business, received a $123 million contract for the Directed Energy Maneuver-Short Range Air Defense, or DE M-SHORAD, weapon systems. The DE M-SHORAD weapon system offers protection for manoeuvring ground forces and equipment from threats such as unmanned aircraft systems, or UAS; rotary-wing aircraft; and rockets, artillery and mortars. The prototype systems are integrated on Stryker combat vehicles that the Army Rapid Capabilities and Critical Technologies Office will deliver to a unit of action at the platoon level in 2022.

“The US Army is leading the charge to give soldiers the first-ever operational capability of a mobile high-energy laser weapon,” said Annabel Flores, vice president for Electronic Warfare Systems at RI&S. “Two years ago, the Army set a goal to deliver a powerful, manoeuvrable and proven laser system that was ready for operators to use in the field right away, and our team demonstrated that capability.”

RI&S is the major subcontractor to the prime contractor KBR / Kord Technologies and is the subsystem developer for the laser weapon module, beam director assembly and the radar acquisition system for the DE M-SHORAD weapon system. The award follows a US Army DE M-SHORAD exercise at Fort Sill, Oklahoma, in summer 2021. RI&S-developed subsystems were assessed in a series of realistic scenarios designed to evaluate the performance of the prototype weapon system and demonstrate its technical maturity and readiness. During the exercises, soldiers operated the system and effectively tracked, identified and engaged a variety of targets.

“In just a few days, soldiers went from training to operating the system and engaging targets to providing valuable feedback to our team that will help improve future systems,” Flores said.

Soldiers get virtual and hands-on training: Stryker crews composed of three-Soldiers each – a driver, crew commander and laser gunner – trained in DE M-SHORAD simulators in which they could do virtual walk-throughs of the entire vehicle and laser system, and practice firing at simulated targets. “It wasn’t PowerPoint slides and tech manuals,” said Justin Martin, chief engineer for High-Energy Lasers at RI&S. “It was a very interactive training environment where they could immerse themselves into the vehicle and the laser design itself to really understand what was in the vehicle.”

The soldiers needed to start from scratch, learning about the basics of lasers, laser safety and how to operate the new weapon system. They spent a week in the virtual environment before participating in live fire drills. “They weren’t touching controls or seeing anything that they hadn’t already immersed themselves in before virtually,” Martin said. “It helped that the laser gunners were able to use an actual video game controller to operate the weapon – it’s something that young soldiers are very familiar with.”

“We made a combat prototype,” Martin said. “We didn’t just make a laser instrument for experimentation and research, but we built a well-integrated, robust laser weapon on a Stryker combat vehicle to be operated by soldiers. There will be four such Strykers ready to go and be used by brigade combat teams operationally.”

The Stryker is an eight-wheeled armoured vehicle designed to carry an infantry squad across roads and cross-country to the battlefield. The vehicle has been adapted to a wide variety of missions and can support a number of mission equipment packages.

Previously, RI&S has delivered three high-energy laser weapons systems, or HELWS, to the US Air Force. The systems were mounted on Polaris MRZR off-road vehicles, accruing more than 9,000 hours during operator training and operational assessment. High-capacity batteries powered the Air Force’s 10kW-class laser. The DE M-SHORAD 50kW-class laser is also powered by high-capacity batteries that are charged by the Stryker’s diesel engine.

Scaling up laser power: To go from a 10kW-class laser to 50kW-class laser, RI&S needed more power. Instead of using four to six fibre laser amplifier modules for the 10kW-class laser, they used 20 to 25 modules for the 50kW-class version. “So, the modules are great, robust building blocks that we just literally add more of to get the power that is required, so, there’s more fibre inside of it,” Martin said. “But the real trick is aligning all of those separate beams of light into a single beam of light that has the right characteristics for a laser weapon.”

A more powerful laser weapon results in greater functionality like longer range and speedier defeat capabilities. The 50kW-class laser can zap a hole through a small consumer drone in a flash while detonating or deflecting a mortar within seconds.

The Army is going to use the DE M-SHORAD to complement its fleet of the kinetic M-SHORAD Strykers, said Evan Hunt, RI&S director of requirements & capabilities, High Energy Lasers and Counter-UAS. “The high-energy laser is really well suited for growing, asymmetric threats that we see with drones and rockets, artillery and mortars,” Hunt said. “Laser weapon technology is so compelling for air defence escort of convoys or troop movement missions because it has such a deep magazine. As long as the Stryker has diesel, it can engage.”

During the Fort Sill live-fire exercises, the soldiers quickly learned how to operate the prototype system, demonstrating proficiency in target acquisition, aim-point selection and engagements. According to Martin, the DE M-SHORAD crews were excited to be the first to test a totally new weapon. “You could see it on their faces after they sat down in the seat and then defeated a drone with a tap of the finger,” he said. “They were bought in and ready to push forward with more involved and difficult engagements. Yeah, those laser weapon gunners in the seat taking down drone after drone, they were believers after that.”

The RI&S high-energy laser team believes that after the US Army begins operations with DE M-SHORAD during missions and exercises that the service will see that no other system can provide speed-of-light, low cost per shot and almost limitless magazine, and begin fielding the vehicles at a larger scale.