MSPO 2021 In Poland ~ The Mission Launch 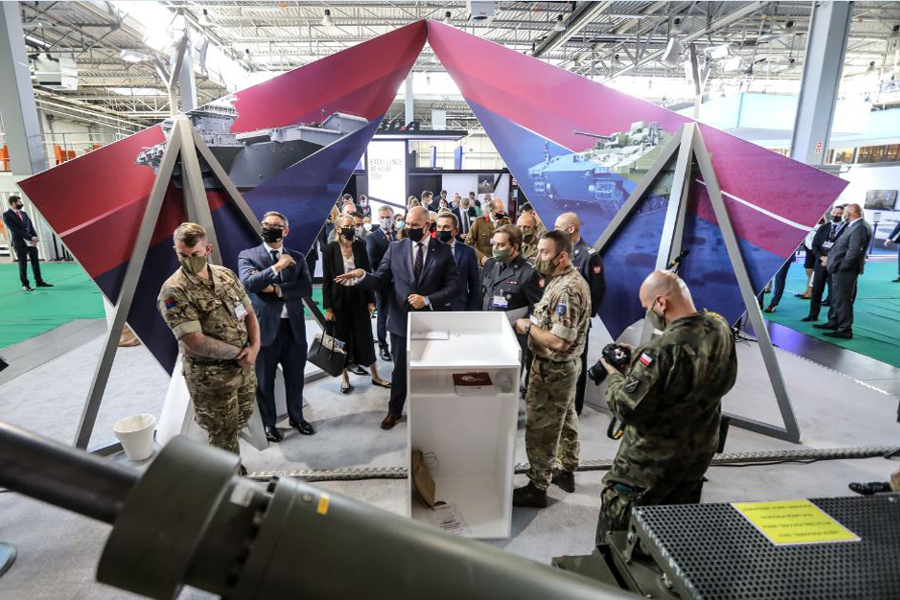 The MSPO 2021 defence expo in Kielce will be formally commenced by the President of the Republic of Poland, Mr Andrzej Duda.

Press Release, Kielce, 06 September 2021: This is the Targi Kielce’s kick–off start of the expo series. The International Defence Industry Exhibition marks an excellent opening of the expo series. MSPO will be formally commenced by the President of the Republic of Poland, Mr Andrzej Duda. The ceremony will be graced with the presence of the Minister of National Defence, Mr Mariusz Błaszczak.

“There has been clear progress if we compare this year’s and the previous year’s events’ data. Last year there were 185 exhibitors from 15 countries. On 2021, we host 400 exhibitors from 27 countries in 2021. Of course, we face certain limitations resulting from COVID-19 all the time. For example, Australian companies will miss the Exhibition because of the international traffic restrictions in this country. However, we do hope that next year’s 30th expo, the anniversary MSPO edition, will get back to on its regular track, and we will convene at the expo we all had known from the times before the pandemic started,” says Andrzej Mochoń PhD., President of the Board of Targi Kielce.

The domestic defence industry enjoys the most numerous representation at the expo; the Polish Armaments Group joins the expo to present a wide range of innovative solutions and systems for the Polish Armed Forces and uniformed services. The PGZ expo stand is the showcase for the latest developments, including the wheeled platforms. A 4×4 vehicle from Huta Stalowa Wola SA and a modified, specialized armoured personnel carrier – KTO Rosomak – wheeled tracked version, a new light tracked chassis with an M120 mortar – this and much more on show. Visitors who join the Exhibition are offered the chance to see C4ISR solutions, a wide range of combat assets and individual soldier’s equipment – including the Fabryka Broni ‘Łucznik’ [Archer Arms Factory] and Tarnów Mechanical Works’ developments. The air defence and anti-missile defence systems will also come in abundance and among them, the PIT-RADWAR offer for the ‘Noteć’ and the solutions the Polish industry has prepared for the ‘Wisła’ programme.

“This year’s Exhibition of the Polish Armaments Group includes over 300 solutions presented by 28 companies. There are systems, subsystems and individual products we deliver, offer or prepare for the Polish Armed Forces, the uniformed services and for export markets. Those who call in the C expo hall will have the opportunity to see what we have managed develop over the last several months,” says Sebastian Chwałek, President of the Management Board of PGZ SA

The MSPO’s presentation includes a traditional display of the Polish military: the Armed Forces Exhibition is held this year under the banner of ‘Endure-Control-Defeat’.

Lockheed Martin will showcase a 1:1 mock-up of their F-35 Lightning II combat aircraft; Targi Kielce has already hosted this impressive machine at the 27th MSPO in 2019, much to the astonishment and delight of the MSPO visitors, including the President of the Republic of Poland, Andrzej Duda. Polish President has again granted His honorary auspices to the expo. It is worth noting that these planes are purchased by Poland under the Harpia programme.

The M1A2 Abrams tank will also be an attention-catcher to visitors this year’s defence trade show; this reliable and robust combat vehicle has already proven itself in the armed conflict zones, the front-lines of the Middle East and in the distant corners of Asia. The third-generation tank showcased at MSPO is still considered one of the best, if not the best, tank in the world; therefore, the Polish army considers the purchase of 250 Abrams tanks in the highest SEPv3 configuration. The Ministry of National Defence has earmarked about PLN 23 billion for this purpose.

Again, safety comes at the top of the priorities list.

This year, in addition to the previously used precautions, i.e. decontamination booths, mouth and nose covering obligation and detailed disinfection of surfaces, new precautions have been introduced. All visitors and exhibitors will be requested to fill in a COVID-19 vaccination survey. The information regarding the number of people who have been vaccinated is necessary to estimate how many people can stay at the fair trade premises at the same time. Targi Kielce employees who work in trade fair projects have all been fully vaccinated.

The 29th International Defence Industry Exhibition is held in Targi Kielce from 7 to 10 September 2021. The Exhibition is an adults-only event.