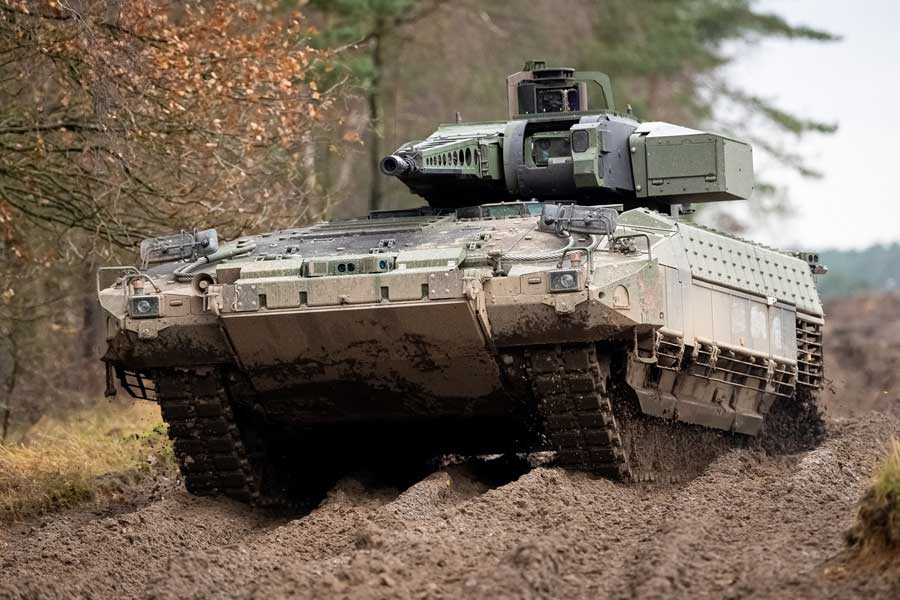 Press Release, Düsseldorf, 29 June 2021: Rheinmetall has won a major order from the German Bundeswehr in the armoured vehicle domain, representing sales volume of well over half a billion euros. Issued through the joint venture company PSM GmbH, the contract encompasses the upgrade of the first lot of the Bundeswehr’s Puma infantry fighting vehicle, bringing them up to a uniform enhanced design status. PSM GmbH is co-owned by Rheinmetall and Krauss-Maffei Wegmann, each of which holds a 50 percent share in the company.

The contract for modernising Germany’s fleet of Puma IFVs was signed on 28 June 2021 at the Federal Office for Bundeswehr Equipment, Information Technology and In-Service Support (BAAINBw) in Koblenz. In awarding this contract, the Bundeswehr remains on track toward an operationally ready, fully digitised fleet of infantry fighting vehicles. Work is slated to begin immediately in July 2021 and is expected to be complete in 2029.nNow official, the initial phase of the order encompasses 154 vehicles, generating sales for the consortium of €1.04 billion. Rheinmetall’s share here comes to €501 million (with value added tax), which will be booked as an incoming order at the start of the third quarter of 2021.

For Rheinmetall, anticipated consortium-internal subcontracting, e.g., in the electronic vision systems domain, is expected to mean additional orders in the three-digit million-euro range. The contract also contains an option for modernisation of a further 143 Puma infantry fighting vehicles, which for the PSM consortium would mean additional sales volume totalling €820 million, once again including VAT. Well over half this amount would be allotted to Rheinmetall.

The major refit now being embarked on is intended to bring the majority of the first lot of the Bundeswehr’s existing fleet of 350 Puma vehicles up to S1 enhanced design status. In preparation for the NATO Very High Readiness Joint Task Force VJTF 2023, which will be furnished by the Bundeswehr, forty Puma IFVs have already been upgraded to S1 status. Of Germany’s 350 Pumas, the only ones not included in the modernisation programme are the 13 driver training vehicles.

Among other things, the new S1 version of the Puma is characterised by standoff-capable effectors like the MELLS multirole lightweight guided missile system; additional sensors such as the new driver’s vision system; and an improved command-and-control architecture. The parabolic and driver vision system heralds the end of the periscope era. For the first time, the entire crew will be able to ‘see through’ the armour, day and night.

The fusion mode combines daylight vision with a high-quality thermal image, enabling early detection of camouflage targets around the clock. The S1 version of the Puma version is the first western combat vehicle that includes a system of this type as a standard feature.

Teamed with the VJTF 2023 version of Rheinmetall’s Future Soldier – Expanded System infantry (IdZ-ES) system, the S1 version of the Puma forms the System Panzergrenadier. For the first time in Germany, the System Panzergrenadier links a digitized platform – the advanced S1 version of the Puma IFV – to a soldier system featuring digital radio technology. On 18 March 2021, speaking on behalf of the Bundeswehr, Lieutenant General Alfons Mais, the German Army chief, declared the system “ready for action”.