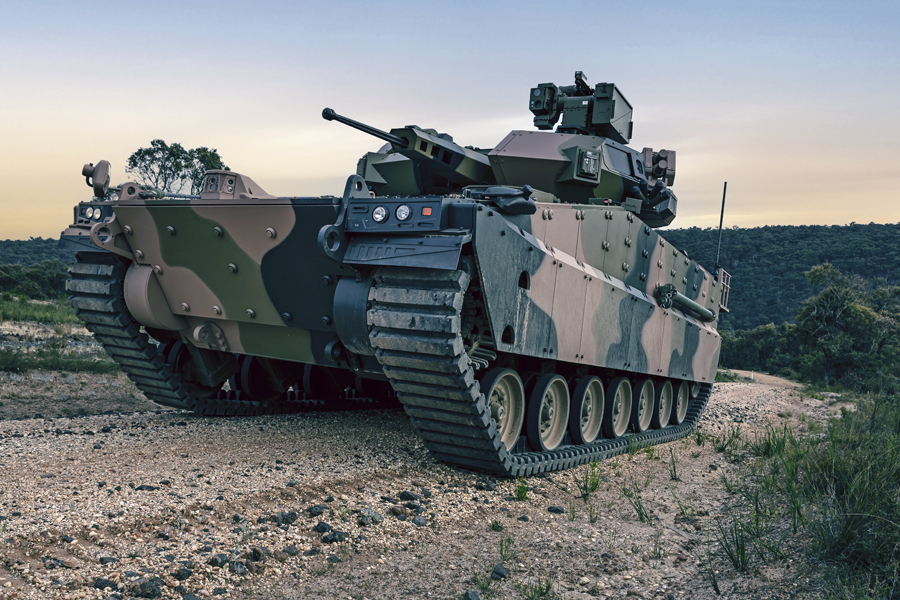 Press Release, Melbourne, 27 April 2021: ‘Where the rubber meets the road’ is a well-known adage that refers to a place where a new idea is put to a real-world test, and it could not be more appropriate to describe Soucy’s highly innovative Composite Rubber Track system fitted to the Redback Infantry Fighting Vehicle.

The Redback, designed by Hanwha Defense headquartered in South Korea, is under consideration by the Commonwealth under an ongoing tender process for Project LAND 400 Phase 3, which is an $18 billion to $27 billion project tasked to acquire 450 Infantry Fighting Vehicles for the Australian Defence Force.

Soucy’s Composite Rubber Track (CRT) offers many advantages over conventional metal track designs including up to 70 per cent less vibration, up to 13.5 decibels of noise reduction, less weight, better manoeuvrability, up to 80 per cent less maintenance, and better efficiency that enables higher top vehicle speeds or fuel savings of up to 30 per cent.

Hanwha Defense Australia’s parent company Hanwha Defence Corporation (HDC) and Soucy have had a long and collaborative relationship which saw HDC working with Soucy’s CRT system for vehicles in the Korean Defence Force. From there, once the advantages of the new CRT system were considered, it became a simple decision for Hanwha Defense Australia to specify the state-of-the-art Soucy CRT for its Redback Infantry Fighting Vehicle.

Should the Redback be selected, this arrangement will see 50 per cent of Soucy’s CRT technology transferred to Hanwha Defense Australia to enable local manufacture of track mechanical components such as road wheels and idlers to be sub-licensed to Australian industry. This work is likely to be awarded to one or more small to medium sized companies following the completion of an ongoing market testing activity.

“Hanwha’s overall AIC strategy is to deliver to our customer the best technologies from Australia and around the world,” said Mr Richard Cho, Managing Director of Hanwha Defense Australia. “In this instance, Soucy’s Composite Rubber Track is a highly innovative product that offers significant advantages and we are enormously pleased to be working with them to bring that technology to Australia under the Risk Mitigation Activity.”

“Soucy has a long history of working successfully with Hanwha,” said Mr Normand Lalonde from Soucy, “and we are excited to see that relationship extend into Australia with our CRT on the Redback IFV. Soucy has a long-term strategy for the Asia-Pacific region and our co-operation with Hanwha is an important part of that.”

There is also strong interest in the Soucy CRT system from other parts of the world with Soucy International recently being awarded a contract to deliver prototype CRT systems to the US Army Ground Vehicle Systems Centre where they will be used during experimentation of manned and unmanned Next Generation Combat Vehicle platforms.

“With the advantages of the Soucy CRT being so clear and decisive, we were gratified but not really surprised to see the US interest in the system. I think CRT is going to be the best solution for many programs and I am proud that Hanwha is working with Soucy to bring it to Australia,” Mr Cho said.