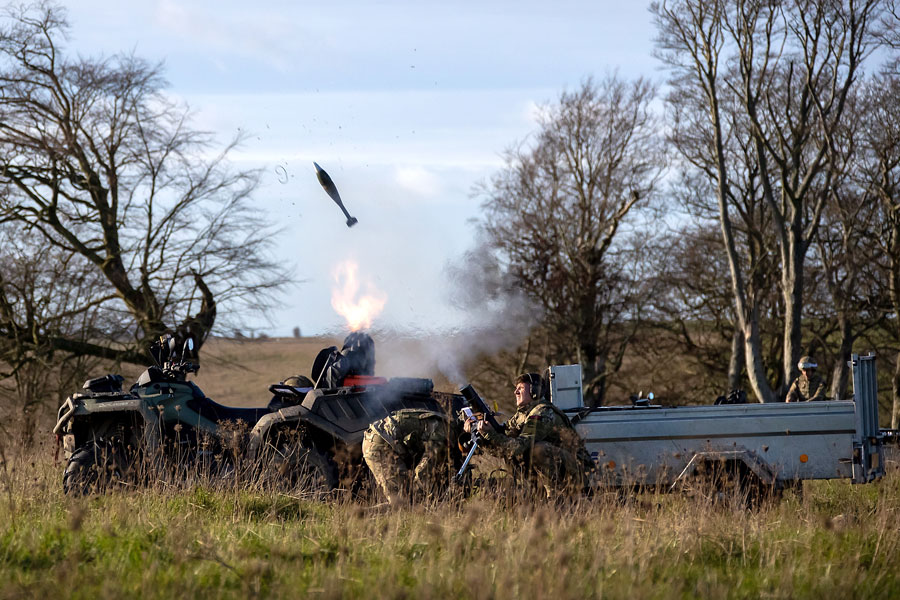 Mortars have been a staple of warfare for centuries and they still remain a highly dynamic weapon, which can quickly bring fire support to advancing troops on the frontline. But they can be vulnerable to increasingly powerful enemy radars which can track them down, prompting a counter-barrage to destroy them if they are too static.

As Royal Marines continue to evolve as part of the Future Commando Force modernisation, everything from kit, clothing, weapons and tactics is coming under the microscope. As part of that, 45 Commando’s Mortar Troop are scrutinising their primary weapon’s vulnerabilities to powerful Mortar Locating Radar and how they can avoid being discovered.

The Can-Ams kept them on the move, allowing the troop to maintain vital fire support to comrades before rapidly shifting position and setting up again. Closely monitoring the trials were 53 Battery Royal Artillery, who use specialist radar to pinpoint enemy artillery, working out how long they the mortars could remain in position before being detected and destroyed.

Captain Dale Martin, Officer Commanding of 45 Commando’s Mortar Troop, said: “It is vital that we understand the threats we face on the modern battlefield.
“Mortars provide essential fire support to commando troops on the ground and are therefore a high-value target for any adversary we may face.

“By training with the Royal Artillery who are actively seeking to find and neutralise us we can begin to understand how to adapt our tactics, techniques and procedures to counter this threat.

“The vehicles we are trialling will allow us to increase our mobility on the battlefield therefore increasing our survivability and ability to support friendly forces.”

One of the keys to Future Commando Force is being agile and lightweight, raiding enemy positions quickly, and destroying high-value targets before moving onto new objectives. The commandos tested the Can-Am for its utility transporting their mortar lines, taking advantage of the vehicle’s ability to cross rough terrain quickly. The marines also used the training to compare the Can-Am – which looks like a beefed-up quadbike with six wheels – to mortars which are mounted on the commandos’ Viking armoured vehicles from Viking Mortar Section of Armoured Support Group. They looked at how tactics and techniques differ between the two and how the mortar capability is altered depending on which of the two very different vehicles is used.

Throughout, the commandos used Remotely Piloted Air Systems – in other words a drone – for reconnaissance and target acquisition. Their Royal Artillery ‘enemy’ also used the drones to find the mortars, giving the commandos an understanding on how better to stay hidden from aerial reconnaissance.