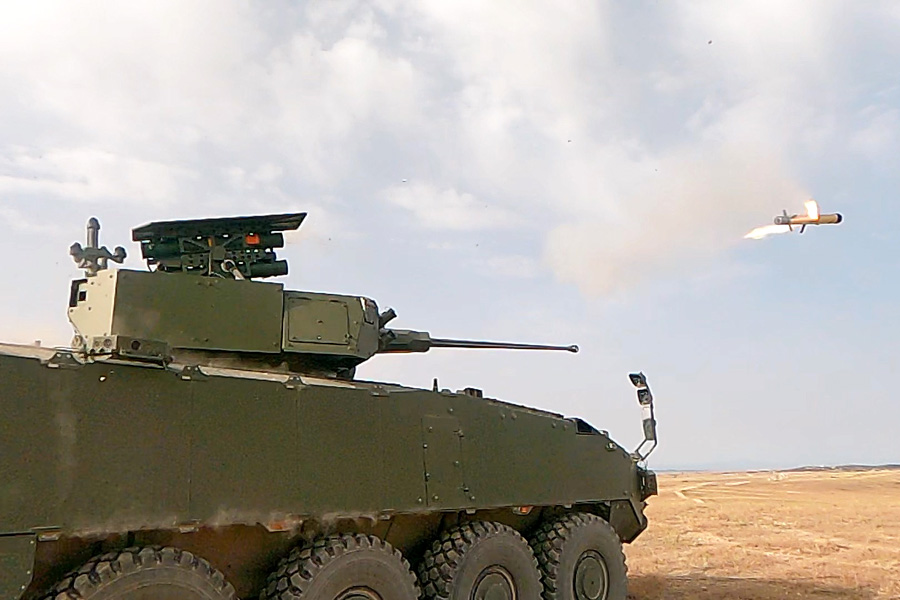 Press Release, Madrid, 27 June 2022: ESCRIBANO MECHANICAL AND ENGINEERING, a Spanish company leader in innovation and cutting-edge technologies for Defence and Security and RAFAEL, a world leader in defence systems, together with its Spanish subsidiary PAP Tecnos, have successfully completed the integration of the Spike missile in the GUARDIAN 30 remote weapon station, selected by the Spanish Army in the D4 demonstrator of the 8×8 Dragón Armoured Wheeled Vehicle.

The first launch from the GUARDIAN 30 reached the target and demonstrated in the first shot the fulfilment of the specific requirements established by the Spanish Army in the 8×8. Besides, this is the first SPIKE LR2 missile launched in Spain from a remote station, which demonstrates the versatility of the Spike missile family and the protection and attack capacity that the GUARDIAN 30 acquires with this integration.

Historic collaboration in defence of the interests of the Spanish Armed Forces: The successful collaboration between ESCRIBANO M&E and PAP TECNOS began in 2021 and will continue expanding in the coming years with the target of establishing a national strategic industrial plan of capacities aligned with the interests of the Spanish Armed Forces and supported by innovative and consolidated technologies such as the Spike, a family of missiles that has been in the Spanish Army for 17 years.

In this sense, both companies will contribute with the synergy of their capacities to a greater economic, industrial and technological return on the public investment made for the procurement and maintenance of missile systems during their long life cycles at national level. This initiative strengthens the Spanish industrial fabric and contributes to forming a technological and industrial base that provides autonomy in the capacities necessary for defence and security by reducing fragmentation and promoting technological specialisation in a strategic industrial sector.

In the words of Ángel Escribano, CEO of ESCRIBANO Mechanical & Engineering, ” the successful cooperation with RAFAEL and PAP Tecnos unites the capacities and technologies of two leading defence companies in Spain and internationally and addresses the needs of our Ground Army and Armed Forces. It has been a successful and solid cooperation for the achievement of this important milestone that provides our Armed Forces with the technological capacities they need to position themselves at the world forefront”.

Moshe Amsalem, CEO of PAP Tecnos, states that ” this collaboration with ESCRIBANO Mechanical & Engineering is the first of many that are on the table. Between the two companies and other Spanish companies that will join the industrial plan we are developing, we are going to provide the Spanish Armed Forces with the best missile technology available, proven and with a great reputation in dozens of armies. The successful launch of the first Spike missile with the GUARDIAN 30 is an example of PAP Tecnos and RAFAEL’s commitment to collaboration with Spanish industry and of the excellent quality and superiority of the weapon systems produced in Spain.

Industrial collaboration to consolidate strategic capacities: The RWS GUARDIAN 30 successfully completed its technical and operational evaluation tests in June 2021 and was selected for the 8×8 contract. Both companies have contributed their expertise, technology and resources for the integration of the SPIKE missile, creating a joint team of professionals who have made it possible for this collaboration to culminate in the successful first launch.

The integration of the GUARDIAN 30 with the SPIKE launch system confers a new and innovative strategic capability in the missile systems sector at national level and contributes to the consolidation process of the strategic capabilities required by the Spanish Armed Forces, integrating the combined capabilities and experience of these two technological leaders. This collaboration shall also allow the addition of complementary and synergistic capacities and continues the process of consolidating national technological and industrial capabilities in the area of missile systems.