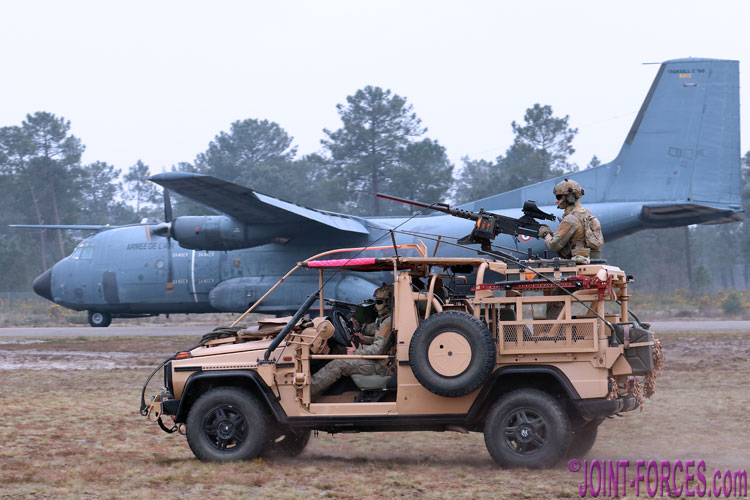 In the first album in this series we looked at an initial recce team from 13th Parachute Dragoon Regiment (13e Régiment de Dragons Parachutistes or 13e RDP), who were inserted under HALO (High Altitude Low Opening) canopies, and in this album we turn our attention to the follow-on TALO (Tactical Air Land Operation). While 13e RDP covertly observed the targets, the insurgent groups holding and exchanging the High Value Hostage, an assault force from 1st Marine Infantry Parachute Regiment (1er Régiment de Parachutistes d’Infanterie de Marine or 1er RPIMa), which is also a component of the French Army Special Forces Command (COM FST), was inserted with their vehicles by a French Air Force C-160 Transall.

Had this been an actual operation, rather than just a dynamic display laid on for an audience of VIPs, Cercle de l’Arbalète members and exhibitors, the TALO would have used a rough or improvised airstrip some distance away from the target area to avoid alerting the enemy and the 1er RPIMA patrols would have then driven forward; quite possibly the landing would have taken place at last light, though dependent on the precise situation on the day it could have been virtually on top of the target and in broad daylight. Although SOFINS took place near Bordeaux at the start of April, the event was not blessed with the best of weather and while the notional rescue operation was set somewhere in Africa or the Middle East the conditions on the two days out of three that the TALO was able to take place conditions were windy, grey and misty in between sleet and rain showers.

On board the aircraft were a pair of Panhard VPS (Véhicule de Patrouille Spéciale) Special Forces light patrol vehicles, based on the G-wagen or Geländewagen, each crewed by three operatives from the 1er RPIMa. This elite regiment, created during WWII in Manchester in 1940, carries the traditions of the Free French Squadron of the wartime Special Air Service including the maroon beret, winged dagger badge and the ‘Who Dares Wins’ motto (Qui Ose Gagne in French). We will look closer at a member of this major constituent component of COM FST in a later album in this series.

As the aircraft braked to a halt, with engines still burning and propellers turning, the rear ramp dropped and the loadmasters jumped down to guide the two machine gun toting vehicles off. They immediately sped clear to form a security perimeter while the ramp was raised and the Transall taxied forward to spin around and then make a rapid departure. Just two minutes and six seconds, according to the data files on my camera images, elapsed between the wheels touching touching tarmac and then leaving it again… and that was under peacetime safety constraints which slowed things down! Once the aircraft was safely back in the air the two-vehicle 1er RPIMa patrol reformed and headed off to join other VPS crews waiting in the wings.