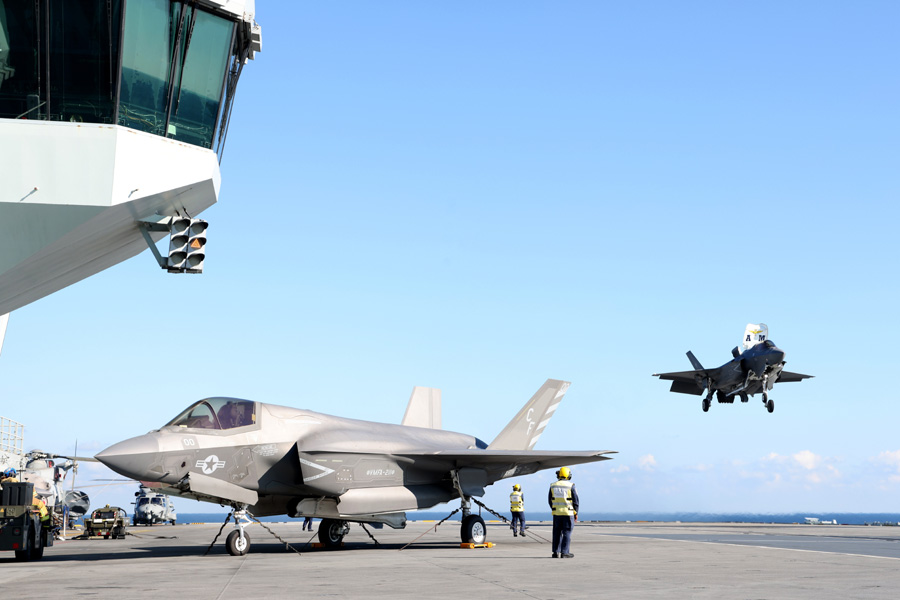 HMS Queen Elizabeth has welcomed fighter jets from a third nation onto her flight deck after working with the Italian Navy and Air Force.

HMS Queen Elizabeth has welcomed fighter jets from a third allied nation on to her flight deck after working with the Italian Navy and Air Force. Britain’s flagship is currently in the Mediterranean following months in the Indo-Pacific region as part of her global deployment. As she heads west back to the UK, the ship has continued her busy programme of working with allied nations and partners.

The latest series of exercises saw HMS Queen Elizabeth work with Italian F-35 Lightning stealth jets. They are the same B variant as the joint RAF / Royal Navy and US Marine Corps stealth fighter currently embarked in the Portsmouth-based UK flagship. Italy is the only other NATO partner aside from the US and UK to operate that variant. The landings and takings off by the Italians means HMS Queen Elizabeth has now hosted onboard jets from three different countries since leaving home in May, with the Italians the first European NATO partner to land on the UK flight deck.

“The fact that US, Italian and UK F-35Bs are able to fly to and from one another’s decks offers tactical agility and strategic advantage to NATO”, said Royal Navy Commodore Steve Moorhouse, Commander of the UK Carrier Strike Group.

“Today’s activity is a telling demonstration of the ability of the UK’s flagship to work seamlessly with other nations; Italy is the third nation to land an F-35B on to the deck of HMS Queen Elizabeth and the seventh military operating F-35 aircraft that the UK’s Carrier Strike Group has exercised with on CSG21.”

Earlier during their deployment, HMS Queen Elizabeth and her jets trained with the USS Carl Vinson Carrier Strike Group and her impressive air wing in the Pacific Ocean, which includes the traditional carrier variant, F-35C – launched by catapult. The UK carrier also conducted multi-carrier exercises with the French Carrier FS Charles de Gaulle, the USS Essex, USS Ronald Reagan, the Japanese Carrier JS Ise and the Japanese A variant of the F-35 stealth fighter.