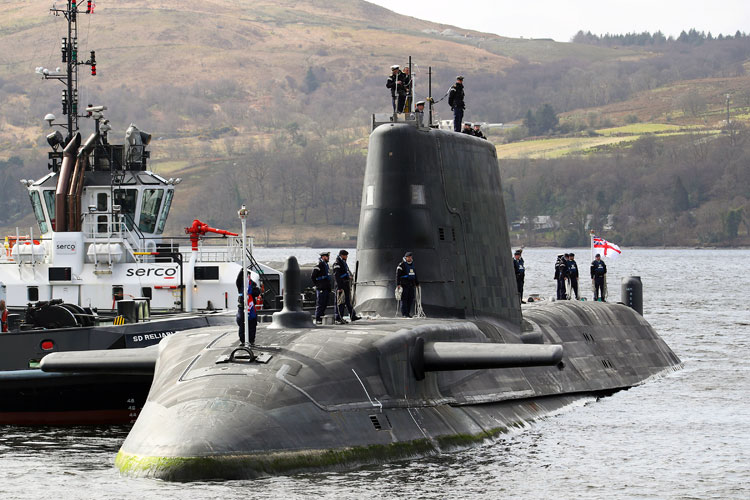 HMS Audacious, the fourth of the Royal Navy’s Astute-class submarines, and her crew arrived today at her new home at HM Naval Base Clyde.

Royal Navy Media Release, 07 April 2020: HMS Audacious, the fourth of the Royal Navy’s Astute-class submarines, has arrived at her new home at HM Naval Base Clyde.

The new submarine and her 98-strong crew arrived at the Naval Base in Argyll and Bute today (April 7), flying the White Ensign after sailing from BAE Systems in Barrow-in-Furness. Welcoming the vessel to her new home were members of the Submarine Flotilla – SUBFLOT – based at Clyde.

“It is with great excitement that we welcome HMS Audacious to the Clyde, joining her three sister submarines,” said Commodore Jim Perks OBE, Head of the Submarine Service. “HMS Audacious represents an ever improving example of the world-leading Astute-class submarine. She is right at the cutting-edge of technology, built here in the UK by our own people. She will provide the country with remarkable security at sea to protect our nation’s interests.”

HMS Audacious will join sister-submarines HMS Astute, HMS Ambush and HMS Artful which are already in-service and operating from Faslane. A further three boats – named Anson, Agamemnon and Agincourt – are currently under construction at BAE in Barrow.

The Astute-class vessels are among the most sophisticated submarines ever constructed for the Royal Navy. Equipped with world-leading sensors, the Astute-class carry both Tomahawk Land Attack Cruise Missiles (TLAM) and Spearfish heavyweight torpedoes. The 7,400-tonne boats can circumnavigate the globe submerged, producing their own oxygen and drinking water. Officially named in December 2016, HMS Audacious was launched in April 2017 and conducted her first dive in January 2018.

Commodore Perks continued: “I am extremely grateful to all of the teams and companies that have contributed to the grand task of building this exceptional submarine. I am especially proud of our Submariners who have worked tirelessly to inject their heart and soul into HMS Audacious to ensure she delivers the very best for our nation.”

HMS Audacious’ crew will now embark on shore training before eventually undertaking the next period for sea trials.