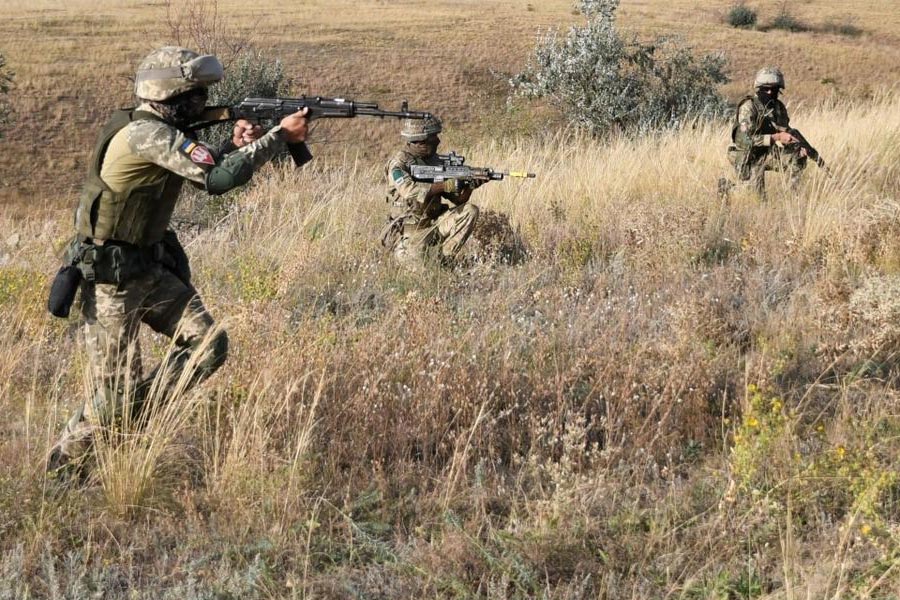 Ukrainian MoD Press Release, 22 September 2020: After the arrival of paratroopers of the 16th Airborne Assault Brigade of the British Armed Forces to Ukraine by military transport aircraft and after airdropping, joint training activities with units of the Air Assault Forces of the Armed Forces of Ukraine have began.

These events are held at one of the ranges of Mykolaiv region, in preparation for the strategic command and staff exercise ‘JOINT ENDEAVOUR 2020’. In the field, paratroopers from Great Britain and Ukraine strengthen cooperation during a set of combat training activities. In particular, fire, tactical, airborne, engineering training, as well tactical medicine and driving of combat vehicles, etc.

According to the Commander of the Air Assault Forces of the Armed Forces of Ukraine, Lt. Gen. Yevhen Moisiuk, the priority of training is the maximum compatibility of forces and assets of units of both countries, which is necessary for further joint action during the practical phases of the exercise.

On the first day, a demonstration of armament and military equipment adopted in the Armed Forces of the United Kingdom and the Air Assault Troops of the Armed Forces of Ukraine was organised for British and Ukrainian service members. After that, British paratroopers got acquainted with the capabilities of the Air Assault Forces, performing various exercises of firing from submachine guns, automatic pistols, large-calibre machine guns, as well as combat vehicle armament.

In addition, joint tactical actions of British and Ukrainian airborne units in the forest-steppe and urban zones conditions were practised.

Source: PA Service of the Air Assault Forces Command of the Armed Forces of Ukraine

Footnote: Today, 23rd September and over one week after the initial parachute insertion, UK MoD have finally released a batch of news images from JOINT ENDEAVOUR 20 with the following caption info:-

“British Paratroopers have mounted a rapid airborne deployment into Ukraine. Elements of 16 Air Assault Brigade began landing on the 15th of September as part of Exercise JOINT ENDEAVOUR, with a total of 250 soldiers deploying by air from the UK within 3 days.

“The multinational exercise will see the paratroopers take part in joint training alongside their Ukrainian counterparts, 3rd Battalion the 80th Separate Air Assault Brigade. The aim is to test the ability of the UK to move rapidly to support its allies should the need arise, providing reassurance to our Ukrainian partners.

“The Battlegroup went through strict measures to mitigate against the spread of COVID-19 before deployment, including 14 days isolation at Beckingham Camp, Lincolnshire, where the soldiers carried out multiple COVID-19 tests.”