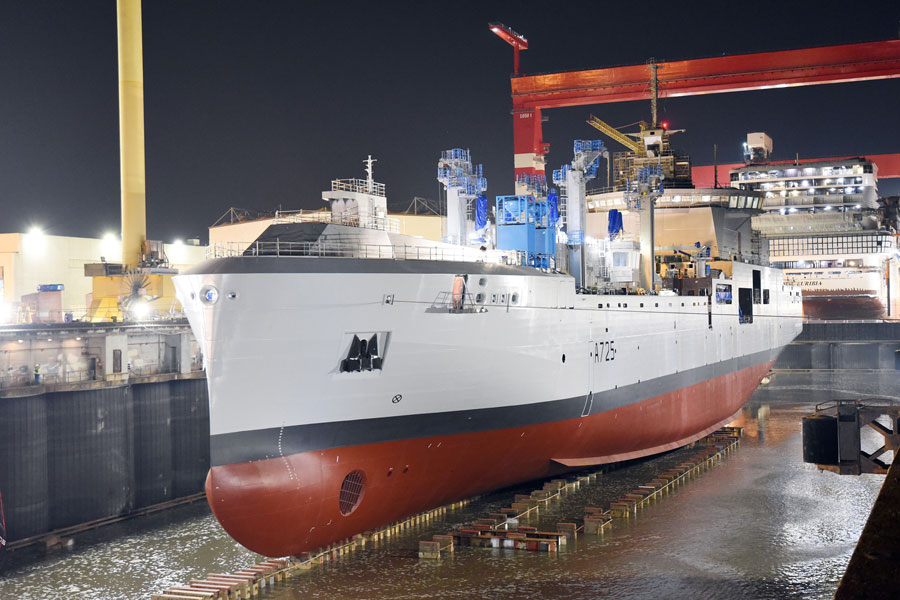 Press Release, Saint-Nazaire, 29 April 2022: On 29 April, the first of the four Force Replenishment Vessels (BRF – Bâtiments Ravitailleurs de Force in French) of the FlotLog programme was launched in Saint-Nazaire.

The Bâtiment Ravitailleur de Forces (BRF) Jacques Chevallier is the first of a series of four ships intended for the French Navy. The contract was awarded in January 2019 to Chantiers de l’Atlantique and Naval Group. The four vessels will be delivered successively until 2029. The FlotLog programme is part of a Franco-Italian cooperation led by OCCAR on behalf of the French Defence Procurement Agency (DGA) and its Italian counterpart NAVARM, within the Logistic Support Ship (LSS) programme.

Laurent Castaing, General Manager, Chantiers de l’Atlantique said: “Our industrial facilities enabled us to assemble the 20 blocks of the BRF Jacques Chevallier‘s hull in a record time of 50 days. This demonstrates that our expertise as manufacturer of civilian ships can greatly benefit the military in terms of time, cost and quality control.”

“Naval Group is proud to be once again present alongside Chantiers de l’Atlantique in this European programme. This BRF, the first of a series of four ships, is a strong symbol of Franco-Italian cooperation. It is also a new successful cooperation between Chantiers de l’Atlantique and Naval Group, which combine their skills in order to offer the DGA and the French Navy the best expertise in the civil and military sectors in the construction of ships of heavy tonnages”, added Pierre Éric Pommellet, CEO of Naval Group.

The first sea trials will start in the second half of 2022, with delivery of the first unit scheduled for the first half of 2023.

A strategic industrial partnership serving the French Navy: The design and construction of the four ships of the FlotLog programme is the result of a successful industrial cooperation between Chantiers de l’Atlantique and Naval Group, driven by OCCAR, in close collaboration with the DGA and the French Navy. Chantiers de l’Atlantique carries out the global design and the construction of the four ships, and ensures the integration and the implementation of the embedded systems. Naval Group is responsible for the design, development and integration of the combat system and the systems destined to receive aircraft and to embark ammunition.

The BRFs, which will replace the French Navy’s Durance-class ships, have a mission of logistical support of the combat vessels of the French Navy deployed as part of the naval air group or naval task groups. With a capacity of 13,000m³ , they carry fuel, ammunition, spare parts, as well as food for the vessels. These tankers will also participate to support missions for inter-allied operations, underlining the need for interoperable equipment. As a true link in the fleet, these tankers will enable France to continue to have an ocean-going navy, capable of conducting longterm operations far from the national territory and thus maintaining its strategic autonomy.

This new series of the logistics fleet is equipped with self-defence capacities. The combat system of the four ships, whose architecture is based on Naval Group’s Combat Management System, ensures the protection against close threats and the fight against asymmetric surface and air threats. In line with international standards, the BRFs will replace the current tankers with increased capabilities and modern equipment in order to support the aviation group constituted around the aircraft-carrier.

The Jacques Chevallier, named after the naval engineer and father of French nuclear propulsion, will carry up to 31,000 tons at full load, making it the second heaviest ship in the French Navy, after the aircraft carrier Charles de Gaulle. It will be based in Toulon.

Main Characteristics of the vessels: