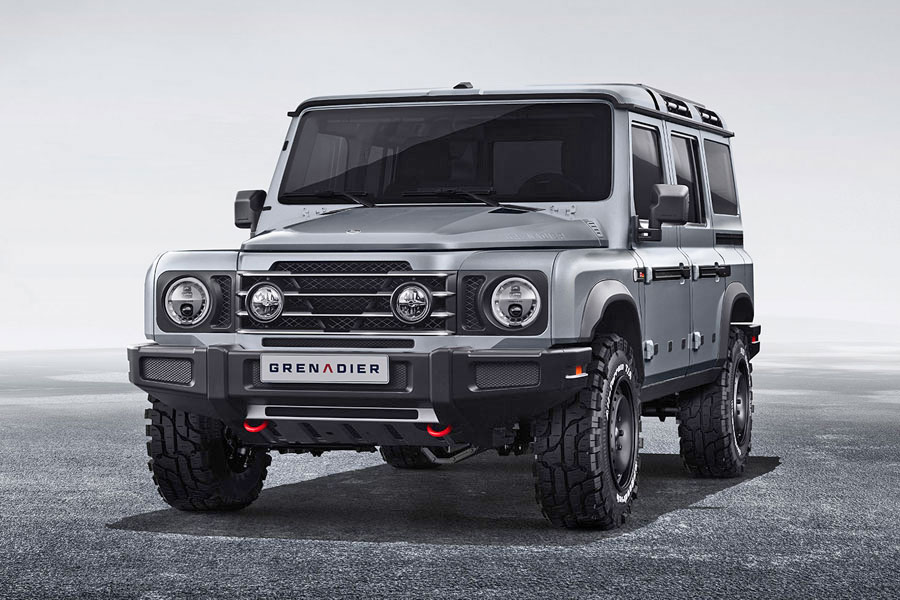 INEOS Automotive has today revealed the exterior design of the forthcoming Grenadier 4×4 as it draws closer to production.

Press Release, 01 July 2020: INEOS Automotive today reveals the exterior design of the Grenadier, its forthcoming, no-nonsense 4×4 vehicle for the world, another step on the road towards start of production.

Built from the ground up on an all-new platform, the INEOS Grenadier has been designed on purpose: namely to meet the demands of its future owners for a rugged, capable and comfortable go-anywhere working vehicle.

“The brief was simple. We set out to design a modern, functional and highly capable 4×4 vehicle with utility at its core”, said Toby Ecuyer, Head of Design. “A design that is ‘easy-to-read’, with no ambiguity about the Grenadier’s role in life. There to do everything you need, and nothing you don’t. Nothing is for show. Modern engineering and production techniques ensure the Grenadier is highly capable, but we have been able to stay true to the essence of creating a utilitarian vehicle that will stand the test of time”.

Dirk Heilmann, INEOS Automotive’s CEO, said: “We are delighted to be able to share the design of the Grenadier so early in the process. Most manufacturers would hold back, but we are a new business, building a new brand, and we want to take people with us on this exciting journey.

“Showing the design now allows us to focus on the critical next phase of the vehicle’s development, testing its capability and durability. We have a very challenging programme ahead, as we put prototypes through their paces in all conditions, on the way to accumulating some 1.8 million test kilometres over the coming year. From today the covers are off. Testing ‘in plain sight’ without the need for camouflage wrapping, foam blocks or fake panels is an added benefit.”

Sir Jim Ratcliffe, Chairman of INEOS, said: “The Grenadier project started by identifying a gap in the market, abandoned by a number of manufacturers, for a utilitarian off-road vehicle. This gave us our engineering blueprint for a capable, durable and reliable 4×4 built to handle the world’s harshest environments. But it had to look the part as well. As you will see today, Toby and his team have done a great job in delivering a design that is both distinctive and purposeful.”

Editor’s Comment: Considered by many to be a logical replacement for the original Land Rover Defender, which of course in Station Wagon form it bears more than a passing resemblance to, and its (also out of production) Santana Anibal / Iveco Massif derivatives, the INEOS Grenadier could fill a major gap in the military Light / Medium Utility Truck market which is currently being partially plugged by militarised Sports Utility Vehicles and which the New Defender is seen as being too expensive to fill. Several governments, including the UK, have large fleets of legacy Defenders which will soon need to be replaced as genuine OEM spares run out and as safety problems are encountered when certain substandard aftermarket mechanical parts are substituted.