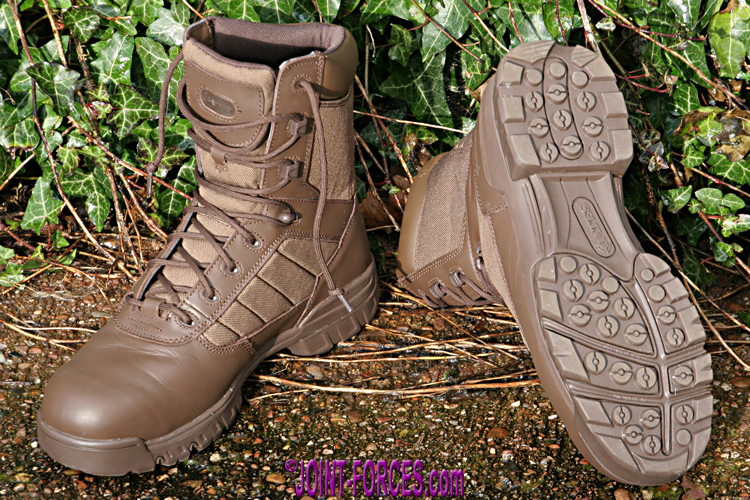 Archive: The latest contract to re-equip Britain’s armed forces with combat boots covers five different categories and two separate manufacturers using their own last designs will supply each category to ensure a higher percentage of troops are able to wear off-the-shelf footwear than if only one manufacturer’s products had been selected. In theory every soldier should be able to choose the one of two boot designs that better suits his or her feet (both male and female sizes cobbled on different lasts are also being catered for) thereby reducing the percentage of troops requiring specialist non-standard combat footwear and subsequently saving money.

This month [April 2014 issue] we have been trialling the ninth of the ten new brown boot styles being issued to UK Forces by the MoD and next month we hope to bring you the tenth which, like the BATES Tactical Sport 8″ model seen here, is classed as Boots Patrol. This BP category is intended primarily for use where the combat threat is medium to low and patrol pack weight is light, so it is the type of boot many who are not deploying to, or based in a desert / arid theatre, are likely to be issued with.

Our initial impressions on this boot are favourable, especially for a combat boot which retails on the civvy market for under £90, though I have to say that I disagree with the supplier’s claim that it “takes no breaking in” as I found it to be rather stiff in front of the ankle for the first few wears; but that might just be me, as I found similar with a couple of the HAIX boot models. Although called the Tactical Sport, this model has been specifically designed to meet military requirements so don’t let the name put you off.

Uppers are full grain leather with 1680 denier ballistic nylon tongue, back and side panels. The collar is padded and the durable PK mesh lining is both breathable and absorbs perspiration. The PESU II insole is also breathable, is comfort cushioned and resists odour as well as being removable and replaceable (spares are included in the box along with spacers to reduce width fitting if necessary). There is also a nylon shank to maintain stability, with instep support from heel to ball, and the shock-absorbing EVA midsole is lightweight and flexible.

The Enforcer UltraLites rubber outsole, cemented to the uppers, is both slip-resistant and oil-resistant with a mini lug tread design to give traction on both grassy and smooth surfaces. The sole pattern is also rather ‘curvy’, which the manufacturer says provides flexibility and I cannot disagree with them on that score. This is unlike what we have seen in the past on MoD combat boots and is more reminiscent of some police patrol boot or off-road trainer soles, but that is not a bad thing for a boot category which is intended primarily for second echelon use rather than as frontline footwear for a war zone.

Our review samples were supplied via Niton999.