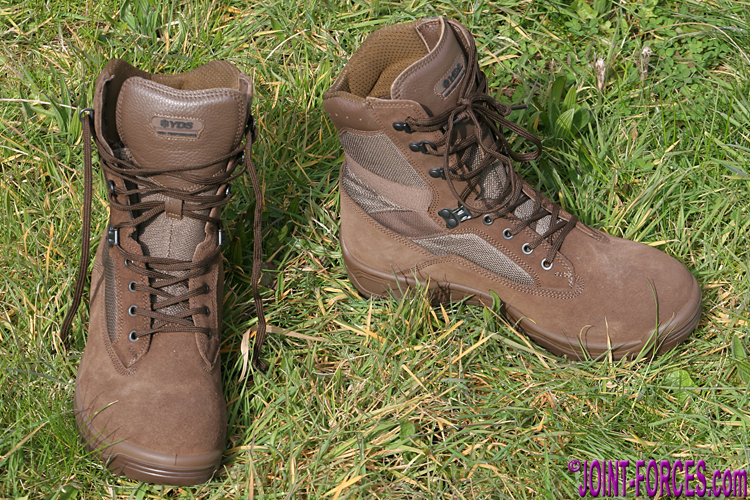 GOLIATH managed to get us a pair of full MoD specification FALCONS right after the Easter break, which coincided with the long-awaited gradual upturn in temperature here in the UK and meant I had them on my feet during that pleasantly warm weekend mid-month when the thermometer peaked higher than it had since last September.

Of course these were nothing like desert conditions, but as an operational change plus close family bereavement meant my planned recent trip to the Arab World had to be cancelled I have not yet been able to wear them in really hot weather. Still, initial impressions are very favourable and these boots are certainly well-made and comfortable.

The leather and mesh padded tongue extends well above the collar, which is scalloped low at the back for vehicle crew comfort, and the tongue gusset extends to 8″ above the base of the sole (UK Size 10) to keep out sand and debris.

A grippy dual density Polyurethane / Rubber sole design, exclusive to YDS, is utilised with the nitrile rubber outer being durable and the polyurethane mid-layer providing cushioning and shock absorption.

In addition to the insole (footbed) specified by UK MoD, YDS have also included their own recommended anatomically shaped removable and washable footbed plus a pair of flat spacer inserts which those with shallower feet will appreciate.

The 8-point lacing system consists of four pairs of eyelets, a pair of conventional pressed metal lace locks and three pairs of D-rings, plus there is a tongue loop to prevent slippage. My initial impressions on these boots are all very favourable; roll on summer.