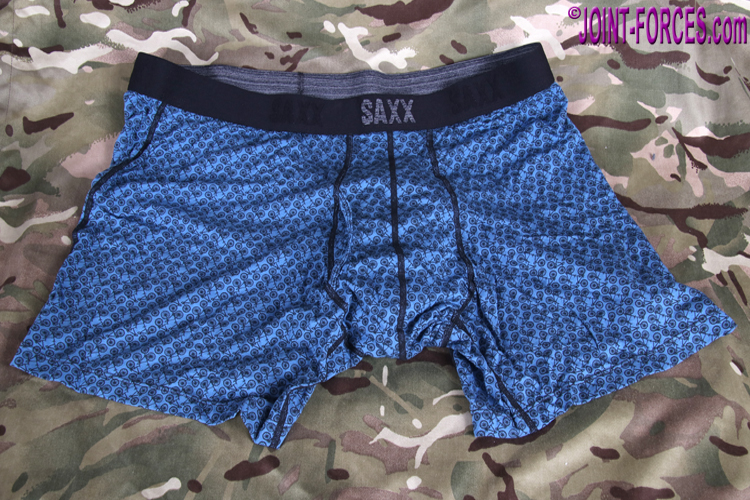 Our attention was drawn to the SAXX Underwear range at the recent Outdoor Trade Show and after trying a pair of their Boxer Briefs I have been converted, writes Bob Morrison.

The SAXX Underwear Company, which is based in Vancouver, is well known by sportsmen across Canada and the United States as their performance briefs, trunks and boxers are both comfortable and supportive, but they are also gradually making inroads with military personnel in the UK with specialist outlets in Catterick, Exeter and Hereford now stocking them.

I have worn briefs (SueMe Tree Trunks) manufactured from beech tree cellulose or Modal, for over ten years (no, not the same pair as I do occasionally change) because I find them to be very comfortable if travelling long distances and then spending a lot of time in the field. The Platinum range of boxer briefs from SAXX Underwear are also manufactured from Modal (95% with 5% Spandex for stretch) but unlike any other underwear I have worn they use a very unique supporting system known as a BallPark Pouch (trademarked) to both keep everything in its place and prevent skin-on-skin friction when working hard; to give examples, competitive cyclists, baseball players and American footballers are a some of the company’s big markets.

When it was correctly predicted that Britain would record its highest temperature last Thursday, 38.7C confirmed in Cambridge, I reckoned these conditions would test my new boxer briefs quite well, so I donned them before heading off by rail across much of the south of England for a two-day visit to the War And Peace Revival in Kent. That afternoon we did not quite hit the record high measured 80 miles to the north but the thermometer still nudged 37C at Beltring, so I reckon I picked a good couple of days to check out the manufacturer’s comfort claims. I was not disappointed.

The unique BallPark Pouch construction is essentially a three-dimensional hammock which cradles one’s crown jewels and separates them from the inner thighs in their own shaped pouch and also offers great support. The Modal fabric the Platinum Boxer Briefs are constructed from is both moisture-wicking and naturally breathable, which help keeps the groin dry in challenging circumstances. There are few things worse than chaffing between the legs on a hot day or when exerting heavily, particularly if you still have a long way to tab or yomp, but by separating one’s testes from one’s thighs it is possible to avoid or reduce the painful rash. After wearing the SAXX Underwear Platinum Boxer Briefs over two successive days, one extremely hot and one very hot, when I spent over four hours on crowded commuter trains each way and in between trudged around WAPR for six or seven more hours each day in high temperatures and humidity, I was rash-free so I reckon the BallPark Pouch system works.

The particular style I opted for was from the SAXX Platinum range, manufactured from Modal with a conventional fly, but several other styles of boxers and trunks made from different moisture-wicking fabrics, either with or without a fly, are available in a range of different colours and patterns. All have Flat Out Seams construction to further reduce the possibility of chaffing or itching. Sizes range from S through to XXL.

If you want to see for yourself how the BallPark Pouch concept works, both John Bull (for Catterick Garrison) and The Kit Shop in Exeter (for CTCRM) stock some of the range and currently have SAXX Underwear point-of-sale mannequins on display. Of course these high quality boxers do not retail at bargain basement ASDA or PRIMARK prices, but on the comfort and support side I reckon they are worth every extra penny.