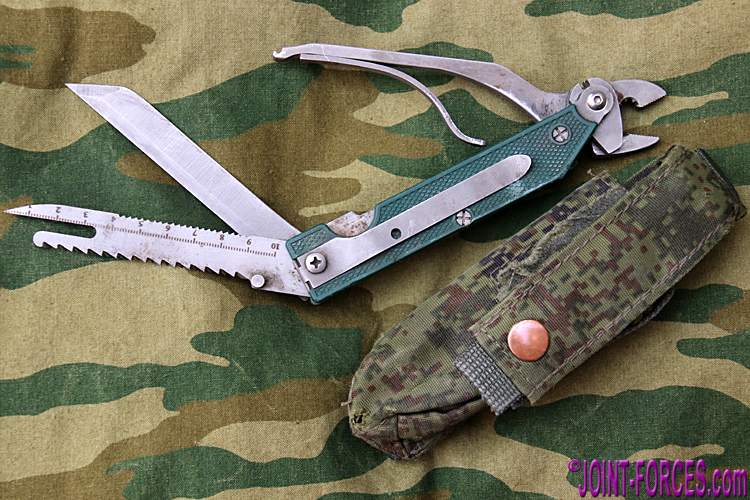 Offered for sale by our old friend Dean from PARTIZAN Supplies on his Russian militaria stand at the recent War And Peace Revival show in Kent, it caught my eye and I immediately photographed the tool while contemplating whether or not I could really justify buying it.

Over the 35 years since I visited my first militaria show at the Hop Farm at Beltring I have learned it is usually best to walk away for a while and have a think about whether or not a purchase is truly sensible before taking out my wallet, but in this case I lucked out as when I returned a little later this comparatively hard to find second-hand multi-tool had been snapped up by a less cautious collector. Genuine modern Russian personal equipment is still quite hard to find in the UK, so I am glad that I photographed this tool, which is of known provenance, before it vanished.

The first thing which struck me about the 6Э6 Multi-Tool was that it was both heavy and agricultural. This is not a finely worked precision tool, like say a Leatherman or Gerber, and although it is supposedly made from stainless steel it was very rusty, but what it lacked in sophistication it appeared to make up for in simple functionality.

Despite the surface rust both the straight backed conventional knife blade and the double edged saw blade (wood & bone and metal) appeared to have held their edges well, and the crimpers in the pliers looked like they would do their intended job; however as I missed out on buying this example I could not test them properly. Although possibly not obvious from the photos, in addition to both an awl (spike) and a Phillips-type screwdriver blade this multi-tool has a number of other built-in features, such as two different sizes of wire snippers in the pliers head, but it is lacking any conventional screwdriver blades which strikes me as strange. The pliers jaws also do not appear to be very wide. The main blades lock open, with thumb locks, and can be opened single-handed.

This multi-tool is issued with a heavy duty fabric sheath with PALS-type (MOLLE) attachment strap on the back, both press stud and hook & loop fastened cover flap, and a pocket on the side for a sharpener. Correction: The camouflage material used for the sheath is the older three-colour EMR pattern rather than the newer four-colour pattern developed for the Ratnik programme and first used operationally in the annexation of the Crimean Peninsula in 2014.