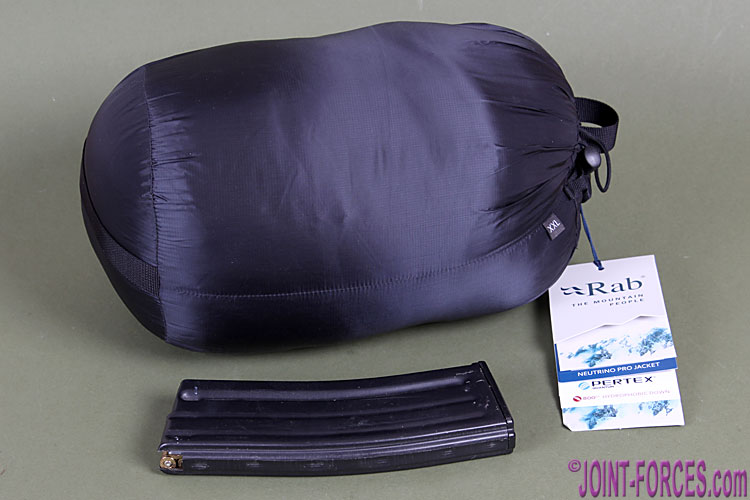 TREKITT, the Hereford specialist outdoor and military clothing and equipment suppliers, have teamed up with expedition clothing manufacturer Rab to produce the Neutrino Pro Military down jacket, writes Bob Morrison.

No doubt many military and security industry readers of this website will be well aware of the excellent range of Rab high performance down-filled jackets and sleeping bags, designed (in Derbyshire) to keep wearers warm in really extreme environments. Likewise, the name TREKITT should be familiar to many as their Hereford shop is magnet for trekkers and troopers alike aiming to be equipped with the best outdoor gear on the market.

Now the two companies have teamed up to remodel the already excellent Rab Neutrino Endurance down-filled jacket to better suit military wearers, with the result being the low-vis Rab Neutrino Pro Military which has not only had all reflective logos (a useful safety feature in the civvy world but not very tactical) removed but also has additional mesh internal dump pockets as suggested by some TREKITT customers. Incidentally, the last time the Hereford company teamed up with a major manufacturer to make their military customers’ wishes come true the AKU Pilgrim boot was created out of the Navy SEAL Spider and I reckon the Neutrino Pro Military jacket could be every bit as successful as that cooperative venture.

Many troops heading out for Exercise TRIDENT JUNCTURE 2018 in Norway next month, and others deploying to Estonia and Poland on NATO eFP (enhanced Forward Presence) duties over the winter, will no doubt be thinking of buying a high quality insulated layer to wear under their combat jacket and the Rab Neutrino Pro Military down jacket should fulfil that need. I already have my flights booked for my first trip to Norway for a few years – normally this theatre is Carl’s speciality but TRJE15 is such a massive exercise that one correspondent will not be able to cover it on their own – and I have every intention of taking this jacket out there to keep me toastie.

Rab use 800FP Hydrophobic Down, responsibly sourced from European geese, which is treated to absorb less water and to dry faster helping the jacket to retain loft, and subsequently warmth, in the damp while trapping more air to make it warmer for its weight. The outer fabric is durable Pertex Quantum Pro, which has a thin water-resistant coating for increased weather resistance in extreme conditions. Total weight for a Large jacket is just a whisker over 600 grammes yet it compresses down incredibly small in the supplied stuff sack.

The Neutrino Pro Military is of adjustable wired hood and high collar design with a full-length double action YKK heavy duty front zip, two vertical zipped handwarmer pockets, an internal zipped valuables pocket on the left chest and two lower mesh dump pockets. The cuffs are Velcro-fastened and the slightly scalloped hem, like the capacious hood, has elasticated adjuster cords to help prevent loss of body warmth; the hood also has a rear volume adjuster tab if not wearing the jacket over a helmet.

The weather in Devon at this time of the year (mid September) is too mild for me to bring you a full review so I will take a more in-depth look at this comfy jacket after I have spent some time in Trøndelag and Northern Hedmark in early November.

To buy the Rab Neutrino Pro Military jacket, which is exclusively available from TREKITT, go to this page on trekitt.co.uk. The jacket is available in five sizes, from S to XXL, and is only produced in low profile Black (any other colours showing on the web page are a temporary glitch). down, down-filled, Featured, Jacket, Neutrino Pro Military, Rab, TREKITT
You may also like