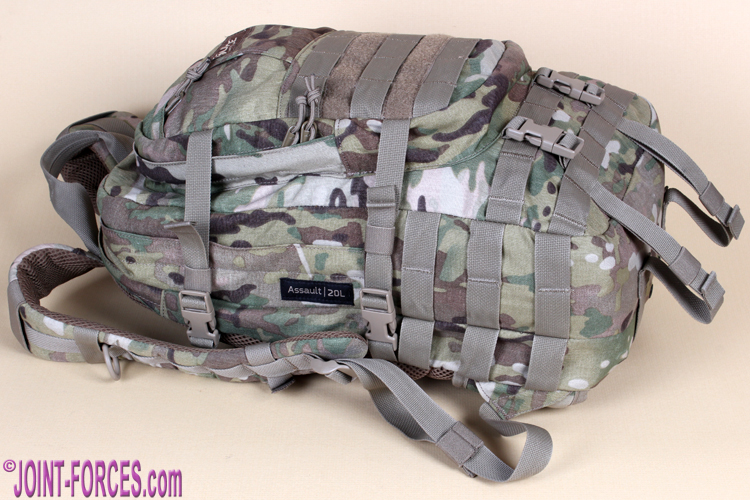 Throughout most of 2017 I trialled several daysacks as replacement for the six year old SOURCE ASSAULT 10 which I used as both a camera bag and airline carry-on luggage, writes Bob Morrison.

That well-travelled ASSAULT 10, which easily fitted all airline cabin gauges if not over-filled but could be quickly expanded by simply strapping on several MOLLE/PALS pouches once in-theatre, was like a brother to me and I was sad when I realised SOURCE had discontinued it from their product catalogue. Now I know that the Israeli manufacturer has come in for some stick over some of the load carriage items supplied to UK MoD under the original 2015 VIRTUS contract, products which the Defence Procurement chain both specified and supposedly field tested for suitability prior to placing an order, but as I have never suffered any quality problems or design issues with any of the SOURCE commercial range I can only write positive things about this.

Back to my daysack requirements. Unlike most soldiers, who will have pretty much the same basic requirements for their small rucksack each time they deploy on exercise or operations, almost every time I head off on an assignment my kit needs will vary. For example, UK assignments can be as short as 12-36 hours, travelling by car, train or plane, with different combinations of cameras and lenses along with a change of basic clothing and some toiletries plus a netbook and ancillaries all needing to fit into one compact bag.

Longer overseas jobs can last anything from two days to two weeks and usually I will have the luxury of hold baggage, a rucksack or roller-case, for the bulk of my kit but under these circumstances I will almost certainly be cramming my daysack with valuable photographic and computer kit until it is right on the edge of the airline’s weight and dimensional allowances.

During my 2017 trials a couple of daysacks from other manufacturers came close to meeting my requirements, but nothing I tested had been just right for my exacting demands and I continued to look for online another ASSAULT 10 on the premise that some retailer somewhere must still have one for sale. Then I had an epiphany. The new SOURCE ASSAULT 20L Hydration Cargo Pack which UK Tactical were advertising at the end of last year was dimensionally virtually identical to my ageing daysack and visually it appeared to be little different.

When the new model arrived I found that to all intents and purposes the 20L is really just a Mk.2 version of the 10, renamed to more accurately describe its true carrying capacity. My old, long-serving daysack camera bag could now be relegated to the Reserves – I won’t be throwing it away as there is still life in it yet.

Like its predecessor, the ASSAULT 20L measures 46x27x20cm and has a central main compartment with a main zip giving top and 3/5ths side access, a rear bladder compartment with side-to-side top access zip, a 3/4 depth secondary front cargo compartment with zip giving top and over half depth side access and a horizontally zipped expanding valuables pocket in the outer face of the secondary front pocket. Inside this secondary pocket there is a deep open-topped document pouch on its rear face and this pouch has both a horizontally zipped nylon pocket and two elasticated top mesh pockets on its outer face.

The main compartment is totally devoid of pockets but inside the bladder compartment there is a bladder pouch with elasticated top and velcro hanging tapes for the included 3-litre (US100oz) SOURCE hydration bladder. I have used this brand of bladder since first seeing a Hum-vee parked atop one to show its strength, at the first Defence Vehicle Dynamics in 2000, and prefer it over the more familiar brand as the top opens fully for cleaning.

Two long straps at the bottom with buckles and keepers can hold kip mat or rolled waterproofs etc. [© BM]

On the exterior of the daysack there are three rows of 3-slot PALS tapes on each lower side, three rows of 5-slot tapes with velcro between on the lower face of the secondary compartment, and two rows of 6-slot tape below this. There are two long compression straps on the base, complete with retention tapes, which can be opened out to carry a kip mat or similar and there are two pairs of traditional compression straps on each side. All six straps have UTX 20mm D-FLEX Side Squeeze quick release buckles and the straps have elasticated keepers.

The ASSAULT 20L, like its ASSAULT 10 predecessor, has shaped and well padded shoulder straps with 20mm lower straps and D-FLEX buckles for adjustment, but if you want a quick release buckle or dump buckle you will need to have this fitted independently (most unit tailors should be able to do this quite cheaply). I have now had this done to mine, as can be seen in the bottom photo, and I will expand on this in a follow-on article.

The waistbelt, which is not removable, is similar to the previous model and has a 1.5” D-FLEX Side Squeeze buckle. I eventually cut the waistbelt off my original (ASSAULT 10)  daysack as I never used it but on the new ASSAULT 20L model I have merely taken the buckles off and taped the padded belt halves with MultiCam tape to form a lower lumbar pad; I will also expand on this aspect in the follow-on article.

There are a couple of minor differences between the 20L and the earlier model and the most noticeable of these is the back panel, which is now contoured padded mesh rather than plain nylon, which cuts down sweat build-up in hot conditions; I confirmed this earlier this year out in Jordan where at times the shade temperature was close to +40C. The bladder pocket is also insulated, with a removable foam pad between the back panels, and the bladder hose, which exits through a slot in the top, is also insulated; I removed the insulating pad for my latest Jordan assignment.

The other construction differences between old and new models are the main zip baffle, which has been reversed to better keep out dust and rain, and the top grab handle is also fractionally longer; both are minor changes based on user feedback. Telling the two models apart is dead easy as the model name tape has moved from right side to left and the rubber manufacturer’s badge on the front pocket has been replaced by a woven tape.

I reckon, based on past experience, that this daysack should last me at least another five years but as most of the main manufacturers constantly evolve their ranges that does not mean I will not be trying out other bags just in case something better comes along.

My SOURCE ASSAULT 20L was supplied by UKTACTICAL.COM who stock it, code number 40104, in MultiCam, Coyote Tan and Black. At under £80 with hydration bladder included it is, in my opinion, very good value for money.