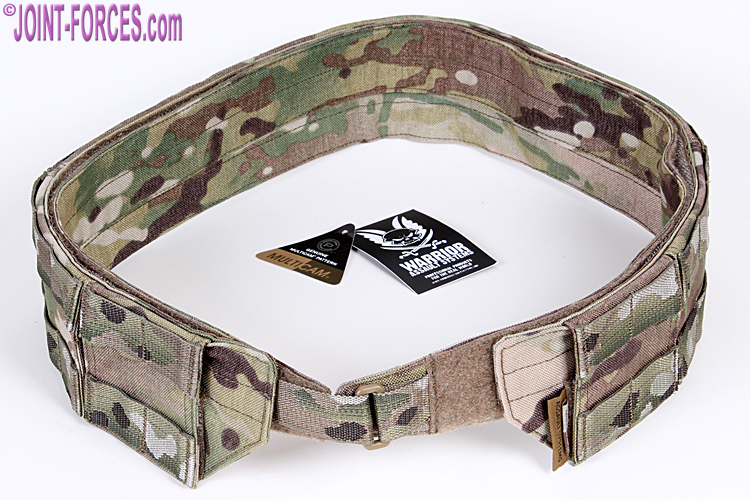 Announced on Twitter just last week by the specialist British supplier Warrior Assault Systems Ltd (I bet you thought they were American, didn’t you) who produce high quality military kit used by elite soldiers and operators around the globe, this ingenious LPMB (Low Profile MOLLE Belt) system consists of a simple 50mm reinforced trouser belt with Velcro on the outside face onto which an outer 80mm fabric belt with fold-over PALS tape panels is attached (over your belt loops). A heavy duty 38mm Rigger Belt or, as shown here, 38mm Cobra Belt is then threaded behind the PALS tape panels section to ensure the whole assembly fits snug and distributes the weight of your pouches (and drop leg holster / pouches if carried) properly around your hips.

Produced in MultiCam, Coyote Tan or Black, this belt is available from stock in three different waist sizes from Medium (86cm/34”) through to Extra Large (104cm/42”) with roughly 7cm/3” additional adjustment. To cater for this size range the basic belt design consists of a single fold-over 10-slot or 12-slot PALS panel running from the sides round the back with smaller 2-slot &/or 3-slot PALS panels at the sides and front, dependent on overall length; the example photographed here is the XL which has a total of 22 pairs of slots – 2/3/12/3/2 – for vertical pouch attachment tapes.

For optimal performance and comfort when carrying a full set of belt pouches all three parts of the Low Profile MOLLE Belt system should be worn but when a full mission set is not required the trouser belt can be worn on its own, setting the pouches aside still attached to the Velcro-backed panels on the 38mm Cobra Belt for speedy reassembly of your personal rig. Alternatively, the Cobra Belt (or Rigger Belt) can be extracted to allow you to carry simply suspended utility &/or water bottle pouches and a drop holster and pistol magazine pouch or it can be used with just the fold-over PALS tape panels to give an ultra-quick release belt kit.

Turning now to the specification, strong and abrasion-resistant 500D Cordura water-repellent textile is used throughout along with US military specification webbing and US military spec nylon with ultraviolet and mildew treatment, plus all components meet military IRR requirements. Genuine MultiCam materials are used throughout on the example photographed here (other camouflage patterns are available to military bulk purchasers) and the Cobra Belt has a sturdy NXNA 38 quick release buckle in Coyote Tan polymer.

It is not very often that I need to wear a full belt rig so, although I do have a large number of MOLLE/PALS pouches including some utility pouches from the wide Warrior Assault Systems range, this complete assembly will probably not see too much use in the short term. However I am already using both belts for their basic purpose with combat trousers and, although I have only owned it for a week, the 38mm fast release Cobra Belt has already come in very useful for carrying utility pouches containing camera ancillaries.