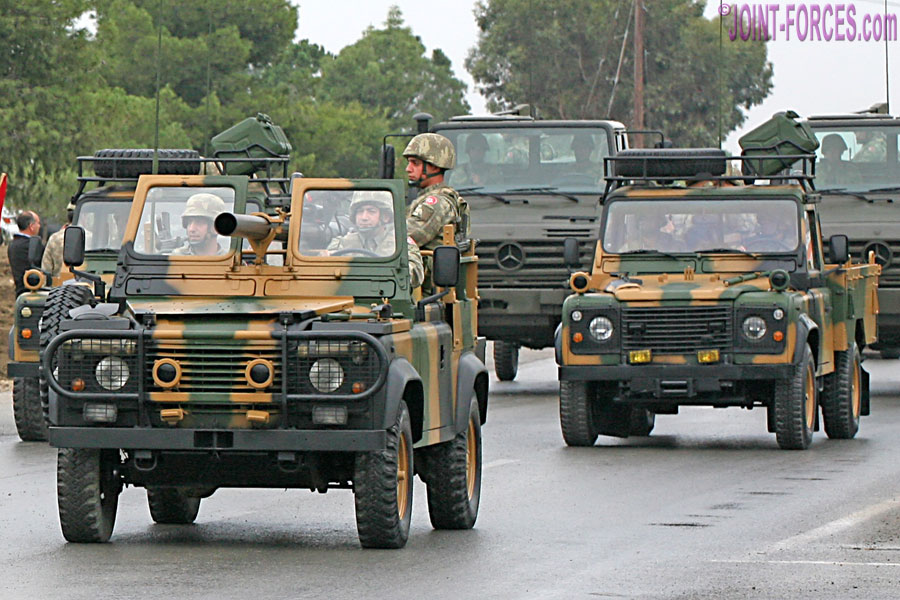 My recent discovery of a backup folder of lost images from a 2014 visit to North Cyprus has allowed me to finish off a story on Defender 90 Gunships, writes Bob Morrison.

Thirty years ago, almost to the day, Land Rover lined up all their demonstrator vehicles which had just been displayed at the biennial British Army Equipment Exhibition or BAEE, held at Aldershot’s Rushmoor Arena, and during the concurrent mobility displays on the nearby Long Valley Test Area.

Back in these days, just a few weeks before the Iraqi Army under Saddam Hussein undertook the ill-judged invasion of Kuwait which would lead to three decades of chaos in the Persian Gulf region and further afield, Land Rover had a very effective and efficient Government and Military Operations (GMO) team. Under the leadership of George Adams, the GMO team could be guaranteed to fly the ‘Green Oval Badge’ flag at international defence expos… until the Rover Group was sold by British Aerospace to German car manufacturers BMW, who it turned out had little interest in the defence side of the business. However in 1990 the range of military Land Rovers in production, across three basic wheelbase options, was truly impressive as can be seen from this poor quality image (scanned from an old slide) which I snapped at ground level as the vehicles were being lined up at Long Valley for a company publicity photo to be taken from high up on a cherry-picker – mounted on the back of a Land Rover, of course.

My primary interests that day were the Australian-built Perentie 6×6 model, of which no less than three versions which had earlier been brought to the UK for company validation were lined up in the back row, and the three Desert and Long Range Patrol vehicles, including one borrowed from 22 SAS, also in the line-up. In future articles in this section I plan to look at these as well as the later Defender MRCV (Multi-Role Combat Vehicle) prototypes, which would pave the way for the WMIK (Weapons Mount Installation Kit) family, but first of all I need to finish off the Otokar Land Rover story. Officially their were no Otokar Land Rovers in that 1990 line-up at BAEE90, but I have long had a sneaking suspicion that the stone-coloured Defender 90 Gunship toting a recoilless rifle, second from left in the front row, was an Otokar prototype across in the UK for company validation just like the three Perentie variants; back then Land Rover always validated conversions before allowing them to be marketed with the company name and I know for a fact that an Otokar Akrep was definitely shipped over to the UK for company validation as at the time I saw photos.

So why do I think that stone-coloured Defender 90 Gunship might have been built by Otokar? It is all in the detail. Although I did not spend much time snapping the D90 Gunship demonstrator during the post-exhibition line-up, as not only were there the Perentie Land Rovers to play with but I also had to slip away to take a commissioned calendar photo for GKN of a Warrior IFV jumping with clear air under both tracks, I did shoot a couple of slides of it during the earlier mobility display. In these two grainy 30-year old images it is easy to see that the BAEE90 demonstrator has almost all the design features seen on the pair of M40A1 portées I photographed 24 years later at the parade in Lefkoşa / Nicosia, though the lighting arrangement is different and the Turkish vehicles have a bumper-mounted brush bar at the front. The flat front passenger door with spare wheel mount and running board beneath seen on the 1990 demonstrator does not feature on the Otokar production batch gunships and a standard Defender door is fitted instead, but it is not beyond the bounds of possibility that the in-service Turkish gunships might have runflats fitted so no spare would be required.

The Land Rover Gunship, or Portée, concept was not new and back in the 1960s the Royal Marines and the Parachute Regiment mounted the WOMBAT 120mm recoilless rifle on the 88” Lightweight / Airportable and 109” long wheelbase models respectively. Over the next couple of decades several small nations would mount the US 105mm calibre M40A1 recoilless rifle on Land Rovers to give themselves a mobile anti-armour weapon and indeed the Greek Cypriot National Guard, as we will see below, had a number of such vehicles deployed south of the Green Line on Aphrodite’s island in the Mediterranean. The portée in my lead photo, on the other hand, was deployed north of the Green Line by Turkish Cypriot Forces and there is every possibility that in the past during periods of increased tension it could well have been tasked with defending a key route through the border which was defended in the opposite direction by a Cypriot National Guard Land Rover with an identical weapon, though in the late 1990s the Greeks adopted the Steyr Geländewagen to carry their M40A1s.

Although I was unable to spend much time with the stone-coloured D90 gunship at BAEE 90, I did snap the rear end and when one compares that detail photo with the one above of the two Otokar-built vehicles in the 2014 parade they appear pretty much identical; other than the rear lighting arrangement, which is similar to that seen on production batch Otokar Defenders. The hinged rear seat back design in particular is identical, as are the stowage arrangements for six ready rounds of 105mm ammunition – two either side of the three-part wheel ramp on the loadbed and two more under the left rear seat – and the grab rail arrangement over the rear cab bulkhead. The G3 rifle clips atop the hinged rear seat backs, however, were not on the BAEE 90 demonstrator. This version does not require a post mount as the M40A1 can be slewed on its carriage.

By 1994 Marshall of Cambridge had produced a Defender 90 Gunship demonstrator and this took pride of place on the Land Rover stand at the Farnborough Airshow that year. Interestingly, this vehicle was not configured to carry the US-made M40A1 recoilless rifle, widely used in the West, but the Russian-made 73mm SPG-9 recoilless gun, used by the Warsaw Pact and many client states; the barrel of this weapon was not rifled, hence the it is classed as a gun. As can be seen from the Land Rover publicity photo of their Farnborough stand, the rear loadbed and post mount were of an entirely different design with the seat boxes hinging outwards through 180° to form a flat firing platform with a ready ammunition locker underneath. Marshalls also released two publicity photos of this demonstrator, crewed by actors in military uniform, to illustrate travelling and firing configurations. Like the BAEE90 demonstrator this vehicle, which appeared at a small number of later expos before being sold off, was left hand drive.

Returning briefly to the 88” Lightweight recoilless rifle portées – the term dates back to WWII when the Royal Artillery mounted their anti-tank guns on trucks for greater mobility in the North African deserts – used by the Greek Cypriot National Guard prior to the introduction of G-wagen equivalents, at least three of these were appeared in the UK around 2007 after demob. Dealer John Craddock brought all three back from Cyprus and sold two to a couple of British military vehicle collectors, Gordon and Val, for restoration and the third was sold to collector Ketil Oftedahl who at that time owned the largest collection of ex-military Land Rovers in Norway. I photographed Val and Gordon’s pair in late 2008, before they started to try to build one good vehicle out of two, and was interested to discover that bulkhead plates revealed that both Lightweights – a Series IIa from the 1967/8 batch and a Series III from the 1970/1 batch – were former British Army vehicles which were most likely cast on Cyrus as surplus to requirements before being bought second-hand by the Cypriot National Guard and locally converted to carry M40A1 recoilless rifles.

For my next article in this Military Land Rovers section I plan, all things being equal, to look at the two-door Otokar cargo and troop carrier Defender variants.