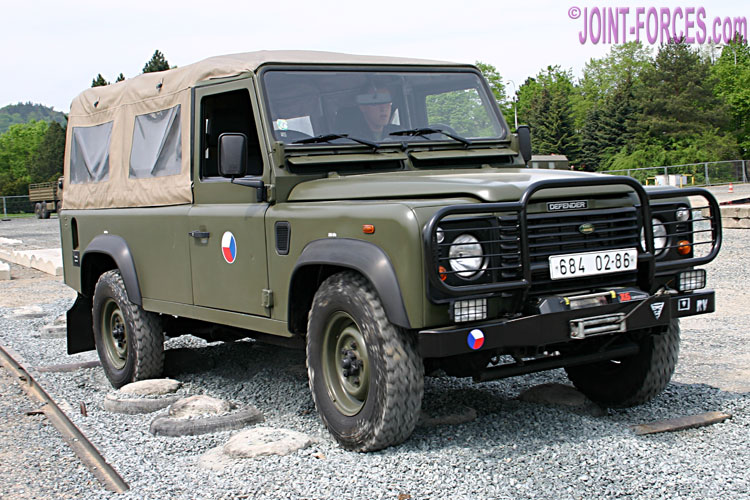 Moving on from the Czech Army Defenders of 2002 which I covered in my last MLR feature, in this article I focus on Land Rovers spotted in at IDET in 2005, writes Bob Morrison.

At the IDET 05 defence expo held at the Czech National Exhibition Centre in Brno AMT Motor, who were the national Jaguar Land Rover importers until 2009, not only had a company display stand but they were also participants in the mobility display outside the main exhibition hall.

Michal Janousek, Managing Director of AMT at that time, explained that vehicles bearing the green oval were held in high regard by the Czech Armed Forces, and that there was a steady programme of procurements for various specialist roles. I was already aware to some extent of Czech Army Land Rovers but the breadth of uses their armed forces had for the marque was a bit of an eye-opener; they had a number of variants on display on manned stances in a separate hall and I was able to examine these.

In recent years British military Land Rovers complied with every piece of civilian legislation drafted by Westminster and Brussels while the former was controlled by EU bureaucrats as, unlike the armed forces of some members states, UK MoD has not had a national exemption since Crown Immunity was lost. The Czechs were more pragmatic and bought precisely the military vehicles they needed for the immediate mission in hand, then exempted them from having to comply with excessive bureaucracy on the grounds that national defence and overseas peacekeeping commitments took priority over everything else. As a result, even some of the latest Defenders in 2005 still used the 300Tdi engine, which was sufficiently technologically advanced for the job in hand, but was not so complex that your average military mechanic could not fix it under field conditions. As I would later discover, however, the Czech MoD had also procured some 2000 Year Model Defenders powered by the five-cylinder Td5 engine; I plan to delve into this in Part 3.

Earlier batches of Czech Army Land Rovers, as covered in the previous article, were partial military specification 110 Defenders with windowed soft tops, two-piece front doors, side-hinged tailgates and military rear bumperettes. By 2005 these been supplemented by essentially civilian specification versions, still powered by the 300Tdi, but with one-piece side doors, windowed soft tops, conventional drop tailgates, and grab handles on the rear crossmember rather than bumperettes. However, they sported NATO pattern towing jaws, and many were fitted with the bumper-mounted X6 Superwinch. Both the originals and the newer 110s were fitted with the same three-panel brushguard, which had horizontal light protection bars in the outer panels.

At the Brno expo there was also a Defender 90 Station Wagon, similar the one I snapped in Poland with the Czech Paras in 2002, which participated in the mobility display; on the first day very sedately, as if a Land Rover Experience tutor was taking a new driver round the course. In contrast the drivers of Russian UAZ utility vehicles, aiming to land the next Czech contract, threw their steeds around the course at breakneck speed, with the leaf-sprung suspension struggling to keep more than two wheels on the ground over the log and rock sections. By Day 2 somebody had evidently had a word with the Para driving the D90 and he speeded up considerably, but throughout the display all four wheels remained in contact with terra firma as the coil suspension handled the twists and bumps.

By now the Defender 110 Windowed Hard top was also in use as a Command and Communications vehicle with the Czech Paras, and four of these were formed up under camouflage nets as a mobile battalion level command post. I was unable to get decent external photos of these inside the dark exhibition hall but those that I had the chance to look at close up all had substantial roof racks with built-in antennae mounts and were configured to carry specialist comms kit. These vehicles had another antenna mount on the front left wing, rear-mounted spare wheels, bumper-mounted Warn winches and brushguards. Although again based on the civilian Tdi specification Defender, these vehicles had been partially militarised and had 24 Volt electrical systems for their communications packages. Internally they were configured on the right side to take two forward-facing radio operators with workstations in front of them, and secure lockers were built into the left side. The most interesting thing about these was how uncluttered and hi-tech they appeared when compared to the ridiculously expensive and overly-late Bowman communications system that the British Army were at that time desperately trying to shoehorn into Defender.

The Czech Military Police (Vojenská Policie) had a standard hard top Defender 110 on display inside the smaller of the expo halls. This vehicle had: a Warn winch and a slightly different brushguard design; mesh panels over windscreen and door glazing; a basic roof rack to carry camouflage nets; blue beacons in wire baskets at all four corners of the roof; an illuminated police sign in a basket over the windscreen; and blue repeater lamps on the brushguard. Naturally, being MP vehicles, these Land Rovers were immaculately turned out.

A second hard top Defender 110 Military Police variant on display at IDET, which I paid scant attention to on the first day of the show, was actually a discreetly armoured variant converted by SVOS and the prototype of a batch ordered for the Vojenská Policie for peace-enforcing missions in theatres like Iraq or Afghanistan. The clue to the armouring was the angular rake, rather than barrelling, under the side door windows but you needed to look hard to spot this. Both cab and rear body were protected to STANAG 4569 Level and there was underside protection from blast bombs too.

Another Czech Army 110 Station Wagon, this one in standard civilian configuration but painted in a very bright orange shade, was displayed by the Bucovice-based 155th Rescue Battalion (Záchranný Prapor) which existed from 2005 through to 2008. An integral part of the Czech Army, this specialist engineer formation trained for the disaster relief role and was tasked with providing rapid response to any civil catastrophe from a train or plane crash to flash flood, accidental chemical spill or terrorist attack. Their highly distinctive Station Wagons were used as personnel transport and liaison vehicles, giving the battalion the capability of inserting fast response teams anywhere that a vehicle could be driven.

For the next article in this mini-series I plan to roll the clock forward to 2015.