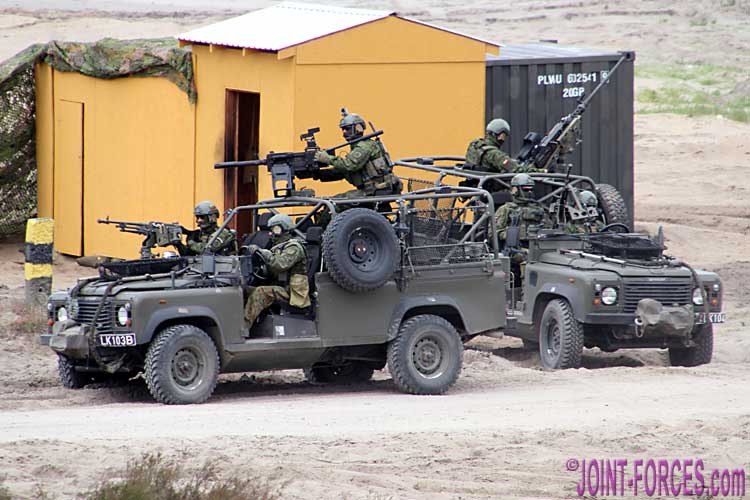 In the first decade of the current millennium the Special Vehicles division of Ricardo Engineering, at the time based at Shoreham Airport, not only converted Land Rover ‘Wolf’ Defenders for UK Forces and the Royal Netherlands Marine Corps (see MLR25) but also produced WMIK (Weapons Mount Installation Kit) Land Rover variants for both Italy’s elite Carabinieri and Lithuania’s Special Operations Forces.

Like most SOF, and SF, units the Lithuanians seldom appear in the spotlight but during the multinational demonstration phase of NOBLE JUMP ’15, held on a former Warsaw Pact live-fire range near Zagan in Poland, proceedings kicked off with an assault by combined Special Operations Forces. Air Troop and Mobility Troop contingents of SOF participated, with the former being inserted by helicopters and the latter converging on the target building using light four-wheeled and motorcycles. Two of the platoons were primarily Czech, carried in KAJMAN Defender 110 five-door gunships, which I will cover in a future article in this section, but a pair of Lithuanian Defender 110 three-door WMIK variants accompanied them.

Produced by Ricardo for the Ministry of National Defence of the Republic of Lithuania between 2005 and 2007, these WMIK conversions are believed to have been based on civilian specification Defenders but the chassis code letter for LK103B showed it had the Extra Heavy Duty or XD chassis. Its VIN plate identified it as a 2006 Year Model vehicle and its engine was the EU5-compliant 2,493cc Td5 diesel.

Ricardo’s sales brochure from a little later revealed that the Lithuanian conversions included: a fourth seat for a rear gunner; a crew protection weapon mount; a mine blast protection armour system, developed with Israeli specialists Plasan Sana; different stowage frames; a 24V supply for radios, with EMC (Electro Magnetic Compatibility) suppression kit; a self-recovery winch; and Oxley infra-red lighting. Curiously, these WMIKs appear to have been produced before UK Forces started to encounter the IED (improvised explosive device) and landmine problems in Afghanistan’s Helmand Province which led to the introduction of the Enhanced-WMIK variant at the start of 2007, so it is quite likely their design process helped with Ricardo’s rapid development of the E-WMIK.

In my photos the belly plate to provide mine protection to the cab area is clearly visible, but not apparent is the rear compartment cargo bed armour. Although the Lithuanian SOF operators were happy enough to pose for my camera so long as masked, they asked me not to photograph the interior of the vehicles. I was, however, allowed to look and was able to confirm both that the fold-up and mesh-backed Ricardo third seat, used by the top gunner when not manning the vehicle’s primary armament, was central and rearward-facing atop the gunners platform and the fourth seat was left-facing at the right rear of the compartment.

UK Forces WMIKs only have a single secondary weapon in front of the vehicle commander but the Lithuanian version had a second general purpose machine gun mount at the rear left allowing the fourth crew member to provide rear cover with this weapon. The secondary weapons fitted to these vehicles were 7.62mm FN MAG machine guns which, with the exception of wooden stocks and blank firing attachments, were virtually identical to the licence-produced L7A2 GPMG fitted to British WMIK variants. Primary armament carried in the ring mount fitted atop the rear cage was either the 12.7mm M2 Heavy Machine Gun or the Heckler & Koch 40mm Grenade Machine Gun as per most British WMIKs.

The users were the elite Vytautas the Great Jaeger Battalion, who form the core of the Lithuanian Special Operation Forces command. I plan to produce a Kit & Camo article on them in the not too distant future.