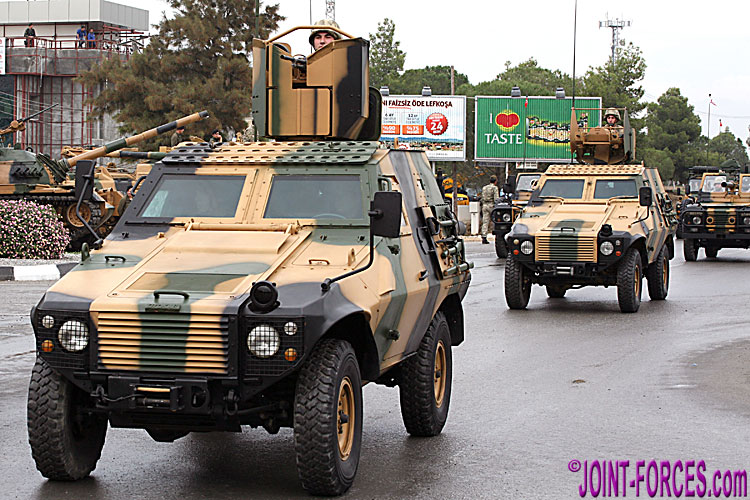 The Otokar Akrep, Turkish for Scorpion, is a three-man armoured patrol car built on the Land Rover Defender chassis but styled on the lines of the French VBL, writes Bob Morrison.

Turkish manufacturer Otokar (formerly Otobus Karoseri Sanayi A.Ş. and now Otokar Otomotiv ve Savunma Sanayi A.Ş.) started producing Land Rovers under licence in the late 1980s, using CKD or Completely Knocked Down kits despatched from Solihull assembled on locally produced chassis, and by the start of the next decade had not only developed their own fully armoured variant, the ZPT (Zırhlı Personel Taşıyıcı or Armoured Personnel Transporter) based on a Shorland design, but had started work on the compact Akrep model.

Used primarily by the Turkish Armed Forces for remote area patrols, convoy escort and reconnaissance tasks, including by the Jandarma Kommando in the south-east of Turkey where the Kurdish PKK insurgent group was a perennial threat, the Akrep had an angular body shape which was clearly influenced by the French Panhard VBL (Véhicule Blindé Léger or Light Armoured Vehicle). As only three or four soldiers – commander, driver and gunner &/or radio operator – were usually required to crew a light recce vehicle it did not need to be as roomy as an eight-man personnel carrier and consequently the body sides could be angled rather than near slab-sided; this facet had the advantage of increasing survivability from both bullet strikes and blasts for no added weight penalty.

The original Akrep model, which was powered by the Land Rover V8 petrol engine, was fitted with a ring mount in the centre of the rear compartment roof to take a heavy machine gun. To compensate for the additional weight of this weapon station, plus the radio communications rig in the rear compartment and a large quantity of 12.7mm ammunition, the body was shortened to leave only minimal overhang behind the rear axle. It has always been my belief that this variant had thicker than usual armoured plates (I reckon the more boxy ZPT’s armour was around 6.4mm thick) but I have never been able to confirm this.

I can be reasonably sure that production started in 1994 as by July of that year one of their Military Sales Team sent me an info pack with a hand written covering letter confirming Akrep was now in service with the Turkish Security Forces with a single remote operated GPMG turret. My request for info was prompted after a little earlier that year I had received a couple of clandestinely taken photographs from a Land Rover enthusiast who worked for a cargo warehouse company near Heathrow. These photos were of an all-white armoured car which looked like a VBL but my contact confirmed that it had originated in Turkey and the running gear was most definitely Land Rover rather than Panhard (Peugeot). When I called a high level Government & Military Operations contact at Land Rover’s Solihull HQ he requested I keep the photos under wraps due to the secrecy of the project but later the G&MO team confirmed that the APC had been airfreighted to the UK to ensure that it both met Land Rover operational specifications and could pass tests (e.g. tilt angle, mobility, and suspension travel) to allow NATO classification. In the photos there was a large dustbin-like object on the roof and it was only when I later picked up early Otokar product brochures that I realised this was just a test weight to replicate gun turret and gunner during the tilt tests.

This new Turkish armoured Land Rover used (at that time) revolutionary computer assisted design programming, similar to that being used by Land Rover to design the P38A Range Rover and redesign the Wolf, to produce a vehicle which blended Land Rover mechanicals to an essentially VBL-style monocoque body shape resulting in a more spacious three-man armoured car proof against 7.62mm ball ammunition fired at point blank range at ninety degrees to the armour. The lower hull design was shaped to provide maximum protection from blast bombs under the vehicle, or landmines under the wheel stations, the fuel tank was explosion suppressed, and the tyres were fitted with Hutchinson run-flats. All glazing and vision blocks were manufactured from laminated armoured glass with a polycarbonate anti-spall liner to give the same degree of protection as the hull. For close-in self-defence there were firing ports in both sides of the rear body, the rear door, and both front doors, with vision blocks above the rear three ports.

At the outset two basic versions of the Akrep were produced; the Overhead Weapon Station (OWS) version had a single optically controlled machine gun on the roof and the Remote Controlled Turret (RCT) version had twin machine guns. I believe the former was primarily designed as a convoy protection and reconnaissance vehicle, whereas the latter was intended to provide heavier supporting fire against enemy insurgents. Both variants had optical systems for night-time operations and the RCT also sported an infrared headlight. A policing version for internal security duties and a mobile ground surveillance version, with radar and optical observation systems for border monitoring were also advertised. A personnel carrier version of the Akrep was also produced, in prototype form at least, but the Shorland-derived VPT was still in production status well into the new millennium and I have never been able to determine if this Akrep APC variant was actually sold in any quantity. Engine options originally offered were the V8 and 300Tdi, but by 2003 only the diesel option was still available.

According to Otokar defence sales literature, the maximum road speed of the Akrep was 125 km/hr and range was claimed to be 1000 kilometres on a full tank. Drive train and controls were virtually identical to Solihull vehicles, though the suspension was up-rated to cope with the heavy body; however combat weight was limited to 3600kg, to comply with European legislation. By the end of the nineties Otokar had begun producing an armoured version of the Hum-vee, called the Cobra, in tandem with the Akrep and eventually this larger 6300kg combat weight vehicle with 1500 kg payload caused production of the Akrep to peter out.

In October 2014 I visited the Turkish-occupied part of Cyprus, the de facto Turkish Republic of North Cyprus, to photograph their Republic Day parades where I had been told various Otokar Land Rover models were likely to be on display. During the ceremony a large range of armoured and softskin vehicles used by both the Turkish-Cypriot National Guard and Turkish Army garrison troops were paraded past the dais in Lefkoşa, the Turkish name for Nicosia, and I was pleased to spot no less that four examples of the Akrep in the column.

Although the early company demonstrator models of the Akrep had remote weapons stations, the examples on Cyprus in November 2014 had crew-served weapon mounts on their roofs. Two different types of mount could be seen on these Akrep scout cars stationed in TRNC (Turkish Republic of North Cyprus) and each one offered a fair amount of protection for the gunner, who was positioned close to the back of the rear compartment. As can be seen from the accompanying images, one had a single machine gun whereas the other had twin guns. I suspect that the twin MG version might have been intended for air defence against low-flying helicopters, hence the unusual shield design which would protect the gunner from shrapnel when the guns were elevated more than would be required in the ground support role, but as I have not seen these vehicles firing their weaponry I might have got this wrong.

The Akrep was one of a trio of Land Rover versions on my shopping list of rare models to be snapped before they went out of service – the others being the Belgian Minerva, based on the Series One chassis, and the Israeli David, a small armoured vehicle built on the Defender 90 chassis. Back in the late 1980s I missed my chance to photograph Belgian Para-Commando Minervas on exercise by a matter of hours and I suspect that the last David may now also have been demobbed. Fortunately I did manage to snap these Akrep Land Rovers, though regrettably it was not possible to do full walk-round shots as they vanished right after the parade. Still, I suppose one out of three is better than none.