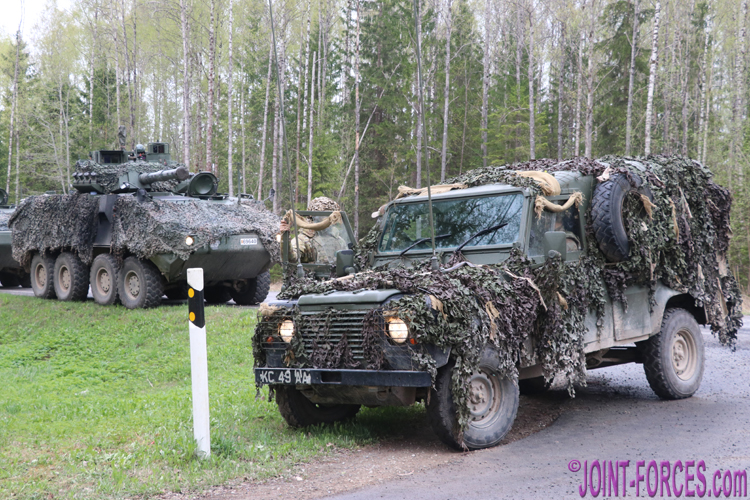 Many viewers of this website will be aware that the British Army is providing the lead for the NATO eFP (enhanced Forward Presence) Multinational Battle Group in Estonia (BG EST) but although this is an armoured formation, with UK Forces using primarily Challenger 2 tanks and Warrior Infantry Fighting Vehicles, there are also quite a few Land Rover Defenders operationally deployed.

There is a belief in some quarters that British Forces no longer use many Land Rovers, partly because contract leased ‘White Fleet’ civilian pick-up trucks and 4×4 utility vehicles are widely used for routine tasks on and around military establishments and partly because the armoured PANTHER Command and Liaison Vehicle and the armoured HUSKY Tactical Support Vehicle have been in service for some time for duties previously undertaken by Land Rovers. However the Defender 110 still plays a major role, despite the fleet being twenty years old or more, and on the inventory of an Armoured Infantry Battalion the TUM HS (as the military designates the Wolf 110) actually slightly outnumbers the PANTHER CLV ( which, incidentally, even though only 15 years old is reportedly earmarked to be cast).

Above: Two shots of PM47AA taken on the first day of the final phase of KEVADTORM 2019 and two more shots taken on the last day [©BM]

For this article I have focused primarily on one vehicle, registration PM47AA, which has been operationally deployed to Estonia on the NATO eFP mission since 2017, and I have uploaded four shots taken on two different days during Exercise KEVADTORM 2019 and two more taken during KEVADTORM 2017 when it had only been in-theatre for a couple of months. The lead image is of sister vehicle KC49AA, and I have include a second shot of this vehicle too, plus I have included a couple of reference shots of a third Wolf, registration KN17AA, to show variety; these two vehicles were also seen during KEVATORM (SPRING STORM) in early May of this year.

Above: This is how PM47AA looked back in 2017, just a few weeks into the operational deployment to Estonia [©BM]

According to official UK MoD listing, PM47AA entered service on 14th July 1998 as a Truck Utility Medium, 4×4, Fitted For Radio, Higher Specification, Hard Top Land Rover, 2.5-litre with EEGR. From the uncluttered 2017 photos it is obvious from the stickers that it has since been upgraded to take the BOWMAN communications system, though viewers with knowledge of British military aerials would have spotted that by the radio antennae set-up; note also the distinctive roof-mounted BOWMAN antenna on the earlier pictures. Brackets for an extending antenna mast are also fitted at the rear right corner, but these are not so obvious on the 2019 shots due to the scrim net and sacking camouflage; most armoured vehicles on the exercise used natural foliage as camo but the British mostly stuck to nets on their wheeled vehicles as these adhere better during high speed road moves.

Above: Two views of KN17AA, which had been in service for 22 years when these photos were taken at different locations in Estonia this May [©BM]

Wolf KC49AA, seen in the lead photo with Belgian armour serving with the UK-led battle group in the background, is a little bit older having entered service on 1st March 1997 but records show it was to the same build spec as PM47AA and it too has been upgraded for BOWMAN. Vehicle KN17AA is the oldest of the three, having entered service on 13th April 1997, and is to a similar specification but it has had a raised air intake fitted which might be an indicator of prior operational service in Iraq; many standard Wolf Land Rovers were deployed in the early stages of Operation TELIC but the higher threat level in Afghanistan saw fewer serving on Operation HERRICK. Incidentally, this last Defender 110 is missing its spare wheel and as a result the spigot for holding it which bolts back onto the internal roll cage is visible.

Although the Defender 110 Wolf Land Rover or TUM HS fleet is now several years past its original shelf life of fifteen years it is projected that a quantity could remain in service until 2030. Some will possibly be replaced by the JLTV if/when it enters service but that could still be years away.