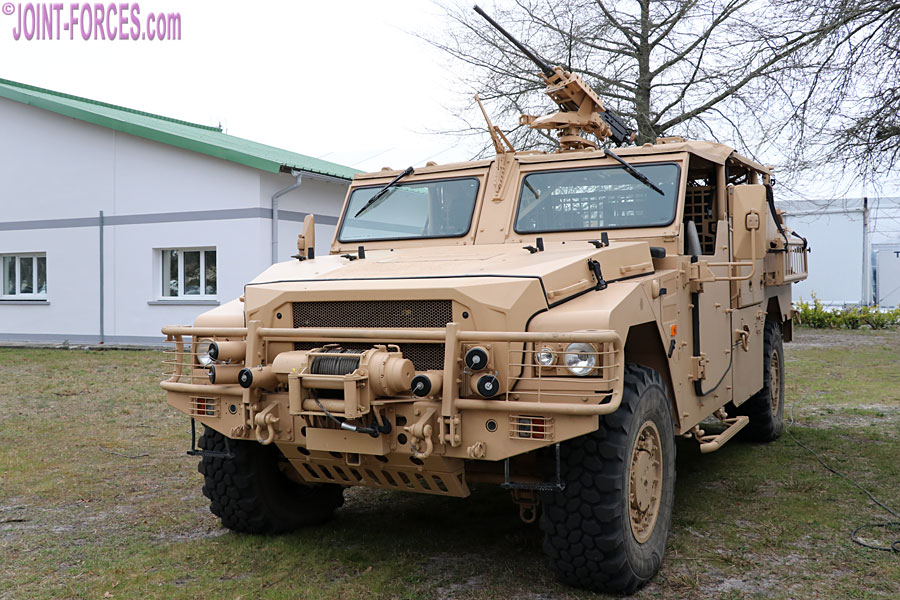 In response to reader interest in the Arquus SABRE sparked by a recent press release by MBDA – First Firing Of MMP From Arquus SABRE – we have opened up the archives to bring a small selection of images of this Special Forces Patrol vehicle produced by the French military vehicle manufacturer.

First a little bit of canned company history. In 2001 Volvo Group bought the truck and bus side of Renault, renaming it Renault Trucks Defense (RTD), and in 2006 the company unveiled its Sherpa 4×4 range at the Eurosatory defence expo in Paris. In that same year Volvo acquired ACMAT of Saint-Nazaire, which manufactured the VLRA light military truck, and brought it too under the RTD umbrella. In 2018 RTD, which also owned the Panhard and Auverland armoured vehicle brands, was renamed Arquus and all new vehicles now carried this new corporate name.

In 2010 RTD displayed the Sherpa Light FS (Forces Spéciales or Special Forces) variant, which in due course would be adopted by French Army Special Forces as the PFLS (Poids Lourd Forces Spéciales or Special Forces Heavy Weight). An order for the procurement of around 240 of the PFLS was placed by the French MoD in early 2016, primarily to replace the ACMAT VLRA on overseas service, and in early 2017 the initial batch of 25 basic configuration vehicles was delivered by RTD. Under the main contract both five-man patrol and two-man logistics variants, with the ability to transport personnel or supplies in the rear, were ordered.

First revealed behind the scenes to a select few delegates attending Eurosatory 2018 in Paris at the time of the Arquus rebranding and then displayed at the SOFINS 2019 Special Forces expo near Bordeaux, the Arquus SABRE is a derivative of the RTD Sherpa Light PFLS, primarily aimed at the export market, which the manufacturer states has increased capabilities, most notably on the integrated communications and armaments side.

According to the comparatively limited publicity material produced by Arquus: “The SABRE benefits from the Sherpa Light’s proven base. It fits the Special Forces’ needs perfectly, in terms of armament, autonomy, payload, communication systems and robustness. Stealthy and extremely mobile, the SABRE is a vehicle of choice for all operations behind the enemy lines.” Gross Vehicle weight is around 11 tonnes, it is powered by a 265hp engine and the published road speed is around 110km/hr or 70mph. Armour thickness and protection levels have not been publicly disclosed.

Two variants of the SABRE have been announced by Arquus: a five-man Patrol version and a two / three-man Logistics variant. Both have a ring mount for a 12.7mm heavy machine gun over the rear compartment and three 7.62mm mounts for Commander and for any occupants seated at very the rear. The SABRE Logistics demonstrator, which was openly displayed at SOFINS 19, had a relatively sterile interior with rear bench seats down both sides. The second vehicle at the event, parked alongside a separate marquee and secure container, had slight roll cage and upper bodywork differences suggesting it was a Patrol version but although I was told it was okay to photograph the exterior I was asked by SF personnel not to open the doors or photograph the interior; naturally, I didn’t push the issue. This vehicle also had smoke dischargers at the front, either side of the self-recovery winch.

Footnote: As part of the same 2016 order around 200 examples of a smaller French Special Forces patrol vehicle, the Véhicule Léger Forces Spéciales or Light Vehicle Special Forces, were also ordered and RTD (prior to being rebranded as Arquus) displayed a prototype, designated AREG, at the Camp de Souge Special Forces base in 2018.