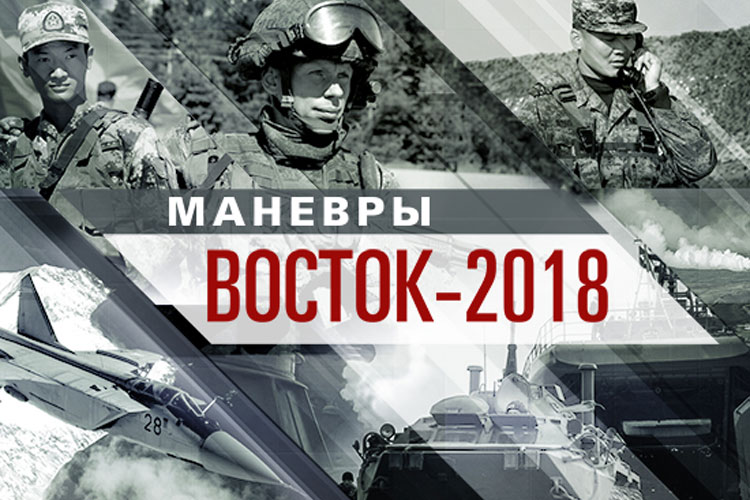 The VOSTOK 2018 manoeuvres have kicked off in the Russian Far East and Pacific Ocean zones from 11-17th September under the leadership of the General of the Army Sergei Shoigu.

Press Releases, 11th September: Military command and control units, troops of the Eastern and Central military districts, forces of the Northern Fleet, Airborne Troops, long-range and military transport aviation of Aerospace Forces will be involved in the manoeuvres. In total, some 300,000 servicemen will take part in manoeuvres, more than 1,000 aircraft, helicopters and unmanned aerial vehicles, up to 36,000 tanks, infantry fighting vehicles, armoured personnel carriers and other vehicles, up to 80 ships and support vessels will be involved.

Troops will train warfare of joint groups in order to ensure military security of the Russian Federation. The main objectives of the manoeuvres are – to check readiness of command and control bodies when planning and regrouping troops, cooperation of ground forces and the Navy, improve skills of commanders and staffs in command and control (C2) when preparing and conducting combat actions.

The manoeuvres will be held in two stages: during the first stage the troops will complete deployment in the Far East, augment forces of the Navy in Northern and Far Eastern maritime zones, practise joint actions and all-round support of combat actions. At the second stage, commanders and staffs will practise C2 of combined units to train defensive and offensive warfare.

Main episodes of the manoeuvres will be held at the training grounds of the Eastern Military District: Tsugol, Bamburovo, Radigino, Uspenovsky, Bikinsky, and also at the Air Force and Air Defence test grounds – Litovko, Novoselskoye, Telemba and Bukhta Anna, in the waters of the Bering and Okhotsk seas, Avachinsky and Kronotsky bays.

Military command and control units, troops of the Eastern and Central military districts, forces of the Northern Fleet, Airborne Troops, long-range and military transport aviation of Aerospace Forces will be involved in the manoeuvres. Besides, military units of the People’s Liberation Army of China will take part in the episodes at the Tsugol training ground.

The manoeuvres are held in accordance with the provisions of the April 1996 Agreement between the Russian Federation, Republic of Kazakhstan, Kyrgyz Republic, Republic of Tajikistan and People’s Republic of China providing for border security and confidence measures. In total, some 300,000 servicemen will take part in manoeuvres, more than 1,000 aircraft, helicopters and unmanned aerial vehicles, up to 36,000 tanks, infantry fighting vehicles, armoured personnel carriers and other vehicles, up to 80 ships and support vessels will be involved.

More then 60 aircraft of CMD [Central Military District] are redeployed to the Far East to participate in VOSTOK 2018. Mi-26 heavy multi-purpose transport helicopters, Mi-24 multi-purpose attack helicopters and Mi-8AMTSH-V transport-assault helicopters were relocated from the Novosibirsk and Sverdlovsk regions to operational airfields in the east of Russia to participate in the strategic manoeuvres of VOSTOK 2018. During large-scale manoeuvres the pilots will provide air support of troops combat tasks and transporting cargoes for various purposes.

Military engineers organized field water supply for troops involved in VOSTOK 2018 manoeuvres The servicemen of water supply units of the Engineering Forces of the Armed Forces of the Russian Federation in the interests of the troops involved in the manoeuvres of VOSTOK 2018 provide extraction, purification and conservation of water using the latest technologies. The newest equipment for water extraction and treatment, which is in the service of the engineering forces, was widely used in the Syrian Arab Republic to provide drinking water to groups of troops and the civilian population.

More than 2,000 infantry of CMD were transferred from the Orenburg region in Transbaikalia within VOSTOK 2018 manoeuvres. The servicemen marched in a combined way over a distance of about 5,000 kilometres, deployed control posts in the areas where troops were deployed at the Tsugol training ground in the Republic of Buryatia. The main forces and means were moved by rail. In total, more than 500 pieces of military equipment were transported, including BMP-2 infantry fighting vehicle (IFV), Grad missile system, T-72 tanks and upgraded T-72B3 tanks, which had recently entered service.

Unified control system of standby Air Defence forces organized in the Eastern Military District within the VOSTOK 2018 manoeuvres which it includes the forces and means to repel air strikes, cover up groups of troops and ensure the control of all means of hitting air targets from a single centre. For the organization of control of Air Defence forces and interaction with the troops concealed, modern means of communication and automated control systems are used. The use of the automated control system allows to identify and distribute air targets as soon as possible, and also to destroy them in real time. During the VOSTOK 2018 manoeuvres the issues of conducting radar reconnaissance, control and interaction will be performed in the conditions of radio suppression of communication equipment and the establishment of radio interference in different frequency ranges.

Units of the Combat Service Support (CSS) troops provide comprehensive logistic assistance and maintenance for the troops participating in the VOSTOK 2018 manoeuvres. CSS units have been deployed at nine training grounds of the Eastern Military Districts to ensure logistic support of the troops on a 24-hour basis, road commandant service as well as large fuelling areas, field meal stations, bakeries, bathroom and laundry facilities are organised at the sites. Field camps having all required facilities for the personnel have been rapidly deployed at the training sites. Troops involved in the manoeuvres are provided with high calorie hot meals.

Over 80 dumps with fuel and ammunition as well as 100 meal stations have been equipped in the Eastern Military District. Up to 2,000 specialists of repairing teams, maintenance brigades of industry enterprises are operating at the Tsugol training ground. A large refuelling area with the use of modern refuelling equipment.

CSS units ensure timely delivering of missiles and ammunition, petroleum, oil, lubricants (POL), food supplies and materiel, maintain and recover automobile vehicles during marches and repositioning. Auxiliary vessels organise comprehensive assistance for warships participating in the manoeuvres at sea. Particular attention is attached to control over fire and environmental safety during the VOSTOK 2018 manoeuvres In total there are some 36,000 troops of CSS units involved in the VOSTOK 2018 drills.