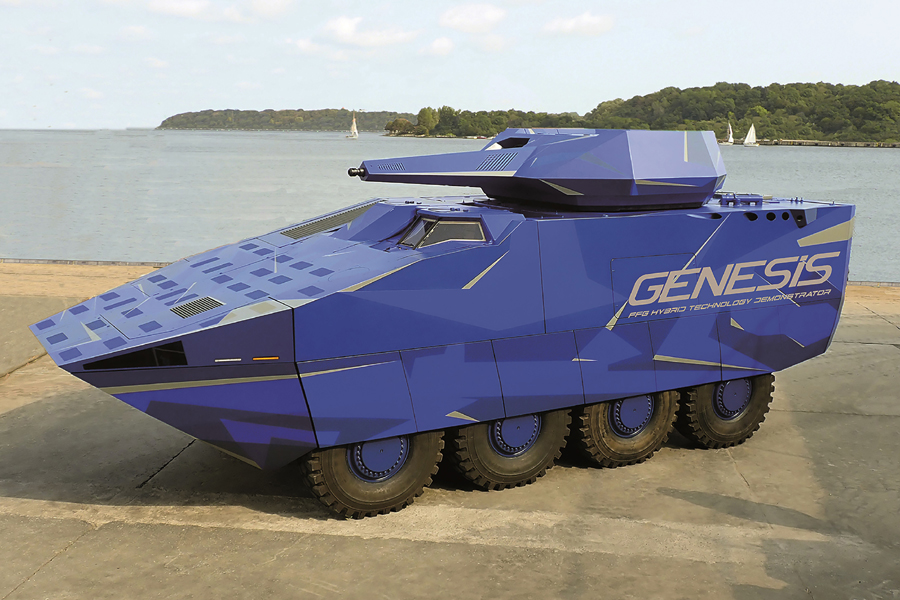 First and foremost, the hybrid-powered technology carrier GENESIS, which, as a kind of self-financed blueprint for the future of tanks, is sure to attract the attention of the trade public. For the advantages of the hybrid concept with diesel-electric power unit used here are obvious, e.g. reduced fuel consumption, minimised exhaust emissions, quiet movement in the field. All drive, control and vital subsystems of the GENESIS are housed in the vehicle platform, which is intended as a carrier for various mission modules.

However, FFG also has successful systems from the traditional areas of tank technology at site in Paris. For example, in the form of the sophisticated WiSENT 2 multifunctional platform, which is based on the chassis of the Leopard 2 and will be presented at EUROSATORY in the configuration of a sapper tank. The heavyweight, which can also be configured as a recovery, mine-clearing and bridge tank, has so far been sold to five user nations, where it could be seamlessly integrated into the existing supply and service chains.

The multi-role capability is also part of the vehicle concept of the ACSV (Armoured Combat Support Vehicle) G5, which will also be on display at the FFG stand. This highly flexible armoured support vehicle that has already been procured in large numbers by Norway. Conceptually, the ACSV G5 combines exceptionally effective mine protection with a robust design, while MOTS and COTS products in particular are used in its manufacture. As a result, the ACSV G5 is a variable and reliable vehicle solution, which – also due to a simple service and maintenance concept – offers a particularly good price-performance ratio over the entire life cycle.

At EUROSATORY 2022, it is not only at its own stand that modern solutions from the northern German company can be found. Another technological showpiece awaits trade visitors at the KNDS stand, where FFG will be presenting its ARM (Armoured Recovery Module) recovery module as a mission module of the internationally used GTK Boxer. This combination of crane arm and winch provides reliable support for vehicle repair in the field or for goods handling and stationary logistical tasks, e.g. in military camps. An obvious advantage of the conception of the ARM as a mission module is its high logistical congruence with the family components of the Boxer, which has been sold around 1,500 times to date. The additional customer benefit envisaged by FFG is the additional possibility of operating the module, including crane arm and winch, independently of the vehicle chassis.

Interested visitors to EUROSATORY 2022 will also get an overview of FFG’s broad product and service portfolio at the FFG stand, in addition to a ‘live’ impression of the aforementioned systems, and an idea of why medium-sized industry continues to be regarded as Germany’s innovation engine.