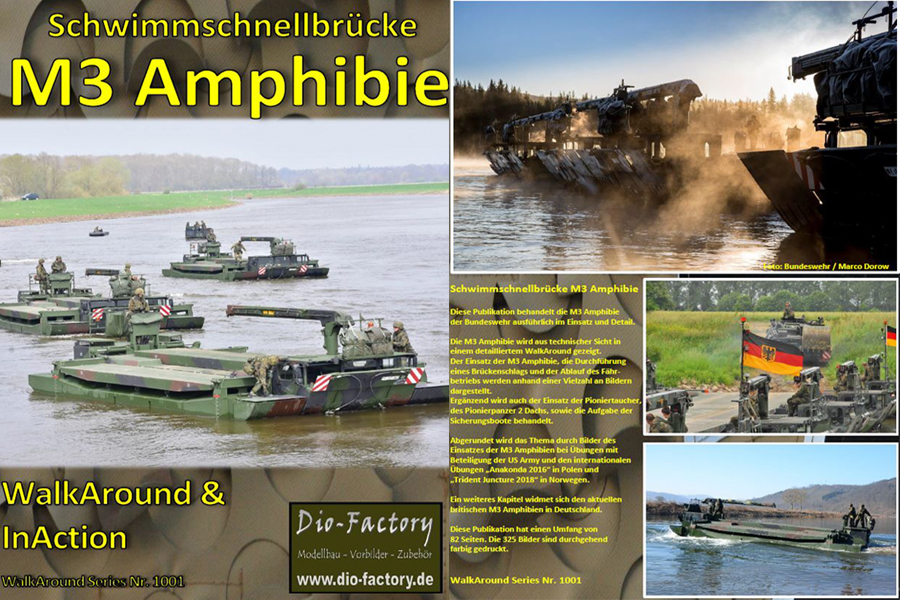 In these times of ever-increasing digital publication, new special interest books are becoming more and more of a rarity. In the field of publications focused on military vehicles, today Main Battle Tanks, Armoured Infantry Fighting Vehicles and other ‘attractive’ subjects are still relatively well covered. However less well-known vehicles of the combat support and combat service support arms are often overlooked. It is therefore nice to see that the first title from the newly launched WalkAround series of publications from the German company Dio-Factory, owned by Sven Eckelkamp, addresses this issue with the M3 Amphibious Bridging and Ferrying Equipment as its subject.

The M3 Amphibious Bridging and Ferrying Equipment, often referred to as simply an M3 Rig, is a four-wheel drive, all-wheel steered vehicle that after being driven into the water can become a bridge when coupled to other M3s or be operated as a single or multi-bay ferry. According to its manufacturer, General Dynamics European Land Systems, ferries and bridges built with M3s can accommodate single loads up to MLC 85 when used by tracked vehicles and MLC 132 when used by wheeled vehicles. With experienced crews, building a two bay ferry takes just three minutes according to the manufacturer, while building a 100m bridge takes approximately 15 minutes. The M3 was developed for the amphibious engineer assets of the German Bundeswehr and the British Army in the late 1990s, with Germany receiving 30 and Britain 38.

Written in German, this soft-cover publication features 84 pages and contains 325 high quality colour images, as well as one technical drawing. It is mainly focused on the employment of the M3 within the Bundeswehr but also contains material that covers British M3s.

In the three page introduction to the work, the reader is briefed on the development and technology of the vehicle, as well as on how it is employed and by which German engineer assets it is fielded. The introduction is followed by a single page with five pictures dedicated to the M2, the predecessor of the M3. The next chapter contains 17 overall views of the vehicle, showing it from all sides in the driving position, as well as in afloat position. Now follows a walk around chapter of 22 pages, featuring 128 pictures and covering the vehicle in great detail. It includes, among others, also detail shots of the interior of the cab and the engine compartment.

The next chapter is dedicated to ferry and bridge building operations and covers them step-by-step, beginning with the preparation of the bridging site, the deployment of the M3, the actual building of ferries and bridges, them being crossed by vehicles and so on, up to the time the M3 rigs redeploy after completing their task. In this chapter not only M3s are shown but also all the periphery, for example Bergepanzer 2A1 armoured engineer vehicles preparing a crossing point and the deployment of divers. The chapter consist of 28 pages and includes 112 images.

Now follows a two page chapter on the British M3s, featuring seven pictures. The next chapter is dedicated to 40 years of cooperation between German and British amphibious engineers. It spans over three pages and includes 10 pictures of German and British M3s being employed together. Now follows a four page chapter with 18 pictures that deals with the MAN 7t mil gl truck and the Anhänger 7t Aufbaugerätesatz – the combination of which are used to transport accessories for the M3s. The final chapter of the publication is dedicated to the way in which M3s are transported by rail and features three pictures over two pages.

All in all the Schwimmschnellbrücke M3 Amphibie by Sven Eckelkamp (WalkAround Series Nr. 1001) publication is well produced and provides a good overview of the M3 Amphibious Bridging and Ferrying Equipment and its employment. The vast amount of interesting pictures, including the many detail shots, makes the publication attractive for all of you that are model builders, military vehicle enthusiasts or technology fans.

The publication, which costs 16.95 Euros plus P&P, can be obtained directly from the publisher via his web-shop: dio-factory.com/shop/walkaround-heftreihe/