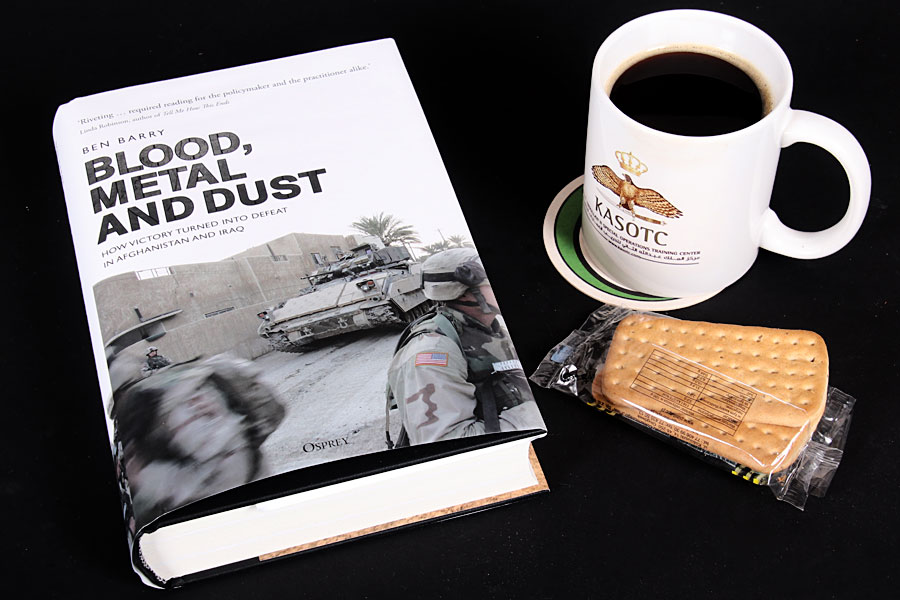 Blood, Metal and Dust is a 528-page study written by the Senior Fellow for Land Warfare at IISS (International Institute for Strategic Studies).

Author Brigadier (Retd.) Ben Barry has operational experience in Bosnia, having commanded 2nd Battalion The Light Infantry during the post-Dayton transition of Peacekeeping Forces from United Nations service to the NATO (IFOR) peace-enforcing mission and later commanded an SFOR (Stabilisation Force) Brigade in the war-ravaged country; he also has an established track record as a military author on operations in Bosnia, Iraq and Afghanistan. On the Classified side, this previous Director of the British Army Staff authored an official British Army analysis of post-conflict stabilisation attempts in Iraq and the lessons learned, so he is well qualified to dispassionately reflect on “how victory turned into defeat in Afghanistan and Iraq”.

I am a very prolific reader, much preferring a good book to the television, and as I read very fast I set aside a week for this title. Big mistake! I am now ten days into tackling this 528-page tome and am still only 400ish pages in because I keep going off to cross-reference with other sources, most notably Jack Fairweather’s epic book on the Afghan débâcle, The Good War from 2014 (which I have in proof copy format), and the Chilcot Report of the Iraq Inquiry. As in Ben Barry’s book the Iraq and Afghanistan tragedies are discussed chronologically, and therefore for much of the time in parallel, this can be a complicated read – but that is definitely no bad thing; make sure you have a comfortable reading chair and adequate supplies of tea or coffee close to hand before you start as this book is hard to stop reading.

The further you get into the book you have to wonder why no senior military advisers were able at the time to persuade an American President and/or a British Prime Minister that fighting wars on two fronts at the same time is seldom a recipe for success. And as for not setting our clear objectives from the outset and sticking to them, even if a little loss of face might be the result, well what can one say? Then there was the stupidity of having troops on the front line answering to different masters, often ones with unclear or differing demands or expectations, as well as theguys being directed from a distance by those with little comprehension of what was really needed out on the ground; defeat was consequently almost guaranteed. This book discusses it all, albeit with the benefit of hindsight of course. I already have a space allocated for it on the middle shelf of my essential reference bookshelf (next to The Good War) and I plan to read it again over Christmas because it deserves a second, uninterrupted, read.

As Blood, Metal and Dust was published yesterday and I needed to get this review online although I have gone through the first 11 chapters page-by-page I have just quickly skimmed through Chapters 12 to 14, for the moment, to read the final ‘Bloody Lessons‘ chapter where the author calls the US 2003 decision to attack Iraq “the greatest strategic mistake of all”. He concludes: “The innocent victims of 9/11… deserved much better than for all the blood, metal and gold to be expended, only for them to turn to dust.”

Recommended – a good Xmas present for those with a serious interest in modern military history? The Publisher is Osprey and it is available to order online in hardback format for £25 (plus P&P) or as an eBook for £17.50. It is also in the bookshops (i.e. those where COVID-19 restrictions allow opening) from this weekend.