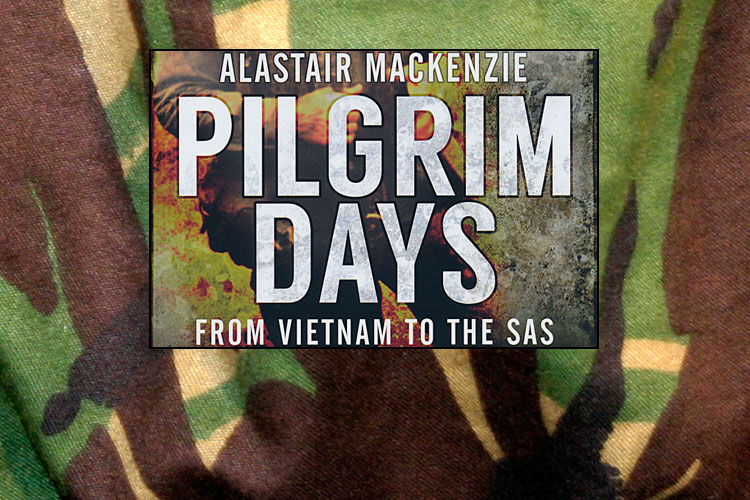 It is not uncommon for a soldier to serve under two berets and an elite few get to wear three – Alastair MacKenzie has worn five, four of them on live operations.

Born in England to a Royal Artillery Warrant Officer father shortly after World War 2, the author spent much of his primary school years at various British overseas military bases before his father retired to New Zealand when young Alastair MacKenzie was twelve years old. In his 18th year he enlisted in the New Zealand Army as an officer cadet and after graduation he undertook parachute training before being operationally deployed to Vietnam as a Royal New Zealand Infantry Regiment platoon commander where his company fought for a year as part of the Australian Task Force; Beret No.1.

After seven years with the New Zealand Army, which by now had returned to peacetime duties, MacKenzie resigned his commission and enlisted with Britain’s Parachute Regiment; Beret No.2 was Maroon. He would serve for around three years as an officer with D (Patrols) Company of 3 PARA, including operational tours in Belfast and South Armagh, before Hereford beckoned; Beret No.3 was Sand. As a Troop Commander with 8 Troop of B Squadron, the ‘Lions of Mirbat’, the author again deployed to Northern Ireland for the first of two operational tours with 22 SAS and during his four years with the Regiment he also commanded one of the Counter-Terrorism Teams and deployed to the Belize-Honduras border area before returning to the Parachute Regiment to command A Company of 1 PARA following his promotion to major. Hong Kong was to be his, and his battalions, next overseas posting.

In 1981, with peacetime monotony beginning to grind him down and no indication that The Paras would soon be called up to fight to recover the Falkland Islands from Argentinian invaders, Major MacKenzie was head-hunted by 44 South African Parachute Brigade, the now legendary Parabats, to become Training Officer for their elite Pathfinder Company, and he resigned his British Army commission to take up the offer. During his time with the Parabats he would served operationally in Angola, wearing Beret No.4. This commission would last for a year before he was recruited by the UK-based security contractor KMS (Keeny Meeny Services) and back in Britain he joined the Territorial Army and 21 SAS, serving as a company commander for a year, before being enticed back to New Zealand to serve with the Army for three more years before Odin called again, with the offer of Beret No.5 and a commission with the Sultan of Oman’s Special Forces.

This, however, is not the end of the story, which fills almost 220 pages in hardback, as after serving the Sultan for four years Alastair MacKenzie returned to the land of his birth and rejoined the Territorial Army for another ten years while working in the defence industry. He eventually retired from military service having attained the rank of Lieutenant Colonel as commanding officer of the Duke of Lancaster’s Own Yeomanry.

This might sound like a pretty comprehensive career, but I have only really pulled out the bullet points. Incidentally, I have a mate who served in 3 PARA (in a different company) at the same time and his recollection was that the author parachuted in out of the blue and, after earning his spurs ‘over the water’, vanished off to Special Forces in what seemed like the blink of an eye.

Now widely available on the High Street, or available for online purchase direct through this Osprey Publishing link, the hardback version is priced at just £18.99. I have not only read it from cover to cover but have gone back over some of the chapters already as, in my opinion, it is one of the most interesting autobiographies to come out in recent years. Highly Recommended.